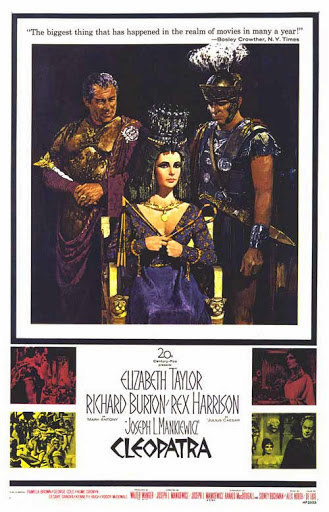 Epic saga of the legendary Queen’s reign from the time Julius Caesar arrived in Egypt until her death some 18 years later. Cleopatra is portrayed as a schemer, firstly to gain control over the Egyptian kingdom from her brother with whom she ruled jointly. Having gained the confidence of Caesar, they become lovers and she bears him the son he never had. Her attempts at ensuring that they boy takes his rightful place in Rome are thwarted when Caesar is assassinated and she flees back to Egypt. Many years later Marc Antony, now responsible for the eastern half of the Roman Empire, seeks and alliance with Egypt. He and Cleopatra become lovers and form a military alliance but are forced to retreat after losing a major naval encounter at Actium. Both eventually take their own lives.

I picked up Cleopatra from the supermarket without realising that it’s on two discs. With DVDs, that is one of my biggest pet peeves. A single film that is so long it is on multiple discs. I’m quite lazy and I like my films to flow smoothly one disc, because I’m far too lazy to get up and change the disc. But that aside, I’ve been meaning to see the film for quite a long time now after hearing of its infamous status as “the most expensive film ever made” and I’m also quite a fan of Elizabeth Taylor.

The only problem that I have with Cleopatra is actually an incredibly huge one that has affected my entire view of the film. The film’s title is Cleopatra but very little focus is placed on Cleopatra herself. This does work in some cases, such as The Godfather (who is hospitalised for the majority of the film) and even in the novel Dracula (who is very rarely seen but is definitely heard from) but in a four-hour film such as this? Yeah, not really working. Because there is an intermission halfway through the film, I somewhat split it into two halves. The first half focuses a hell of a lot on Julius Caesar’s desire to have more control over Rome and a son. Oh, and he marries Cleopatra, they have a baby and he gets killed. The second part focuses on Marc Antony’s brief time in power only for Octavian (who really needs to be slapped) to succeed him and declare war on Antony. He also has a thing with Cleopatra. Complete focus doesn’t come on to the queen herself until the very end, which is where she dies. Focus fail.
Cleopatra’s cast is definitely its strongest element. I’m surprised that only Rex Harrison was nominated for an Academy Award because the entire main cast gave wonderful performances. Despite her character not being the complete focus of the film, I loved Elizabeth Taylor’s performance as Cleopatra. She had the look of a temptress about her and just dripped with sex appeal. Well, she didn’t when she was seducing Caesar.  Telling a man that your boobs are full of love and life is just a bit odd to me.
The sets of Cleopatra are absolutely stunning. Apart from the odd primitive green screen fail here and there the film looks like it was shot while ancient Rome and ancient Egypt were still intact. It isn’t hard to tell where certain scenes in the film take place as the sets are a dead giveaway. The Rome scenes have a lot of red in them and, of course, the signature pillars, whereas the Egypt scenes have a lot of gold in them and wall illustrations in which people look like they are dancing to The Bangles (you know which song I mean).
The score of Cleopatra is very much a mix of the majesty of the Romans and the exotic mysticism of the Egyptians. I thought that it fitted with the film very well but I do have a bit of a bone to pick. On my DVD copy, there is two minutes of music before the good ol’ 20th Century Fox logo appears. Why? It does exactly the same thing at the very end of the film but I got sick of it at that point and just turned it off.
I’m very much in the middle of the road with this film. The cast, costumes and sets are spectacular but the film doesn’t focus on Cleopatra herself until two minutes before “The End” appears. If I’d made the film, I would have split it into two parts: the first would be called “Julius Caesar” (no relation to the Shakespeare play) and the second would be called “Marc Antony”. I also would have focused more on Cleopatra herself, rather than her lovers because the film is named after her!