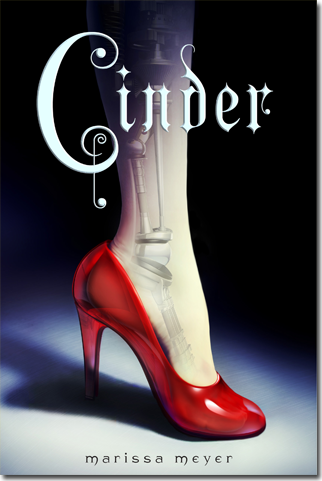 Humans and androids crowd the raucous streets of New Beijing. A deadly plague ravages the population. From space, a ruthless lunar people watch, waiting to make their move. No one knows that Earth’s fate hinges on one girl.
Cinder, a gifted mechanic, is a cyborg. She’s a second-class citizen with a mysterious past, reviled by her stepmother and blamed for her stepsister’s illness. But when her life becomes intertwined with the handsome Prince Kai’s, she suddenly finds herself at the center of an intergalactic struggle, and a forbidden attraction. Caught between duty and freedom, loyalty and betrayal, she must uncover secrets about her past in order to protect her world’s future.

For quite a long time now, I’d had my eye on Cinder but just never got round to reading it. Why? I honestly have no idea. I mean, it’s a cyborg Cinderella in the future! What could be cooler than that? So when the time finally came round for me to pick up Cinder, I had no doubt that I found enjoy it (even though I sort of spoiled the end for myself by looking to see how many chapters there are, whoops) and even though I did have a couple of little problems, I really did enjoy this book.
Cinder is a science-fiction retelling of the classic fairy tale Cinderella, and follows a cyborg mechanic called Cinder, who lives with her legal guardian and her two stepsisters in the futuristic city of New Beijing. The main thing I liked about Cinder‘s story is how unique it is compared to the original fairy tale. Obviously the bare bones of the tale are there, but the way it has been twisted and turned into something different just completely amazed me. I’ve not read anything like Cinder before. Ever. This was such a new and thrilling experience to me that I found myself constantly returning to the book to continue reading. There were very few moments that I found boring and the only times where I could feel my eyes getting heavy was when I needed to go to bed (I actually finished this book just after 4 in the morning, I was up so late reading it). I also liked that even though I found myself guessing what would happen next based on the original story, my guesses were always wrong and the story would go in a completely different direction to what I was expecting. However, my only problem with the story is that I’m a bit conflicted over the end. While I do like how the story came to a close, I don’t really like how I was just left hanging. I wanted to know what was going to happen after the last page, and I wish there could have been more.
I absolutely adored Cinder‘s characters. Even the ones I hated because they were written so well. Starting with Cinder herself, I think she was an awesome main character. I was always routing for her and at times I really felt sorry for her, especially when she was on the receiving end of some abuse from Adri and Pearl. What I loved the most about Cinder is that even though is the ‘Cinderella’ of the story, she was never fully submissive. I loved seeing her stand up for herself, even when it was pretty futile. Speaking of Adri and Pearl, I loved how much I hated them. They were so vile and horrible that I was seriously waiting for Cinder to start breaking some noses. That never happened, but a girl can hope. The intense hate I have for them really shows how well written they were, especially Adri. Not only was she mean, she was manipulative, sneaky, and just plain abusive. No wonder Cinder wanted to leave her house. As for Prince Kai, I feel like he could have been developed a bit more. All I really knew about him was that he’s the prince and he’s under a lot of stress due to his father being fatally ill and the Lunar queen wanting to form an alliance. That’s pretty much it.
Another issue I had with Cinder was the world-building. I don’t feel like there was enough back story surrounding the futuristic setting. This early on in the series all I got was that there was a fourth World War, after that the nations merged together (almost 1984 style, but not quite and with more freedom), the Moon is now inhabited by aliens with brainwashing abilities, and people are dying from a plague. I can understand why there is so little back story surrounding the Lunars, with them being mysterious and all, but I want to know more about what happened on Earth. Hopefully I’ll know more as the series progresses.
After having read so many first-person narratives for quite some time now, it took me a very, very short time to get used to the narrative, and once I was over it, I really enjoyed Marissa Meyer’s writing style. It had a sort of fairy tale element to it, but it was still very clearly science-fiction writing. I loved the descriptions and how vivid they were, as I could totally visualise what was going on and how things looked and played out.
Despite my few little nit-picks, I really enjoyed Cinder. I loved how unique the story is, despite the little world-building there is, and the characters were so well written. I’ll definitely be continuing on with this series very soon!