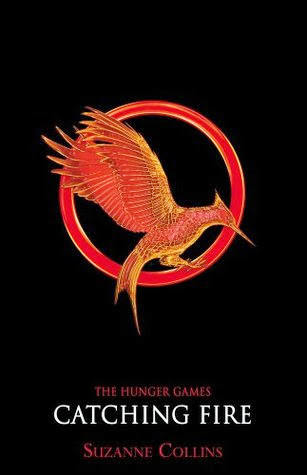 Against all odds, Katniss Everdeen and Peeta Mellark are still alive. Katniss should be relieved, but now there are whispers of a rebellion against the Capitol – a rebellion that Katniss and Peeta may have helped create.

As the nation watches Katniss and Peeta, the stakes are higher than ever. One false move and the consequences will be unimaginable.

I started Catching Fire a few books after finishing The Hunger Games (THG) and I had a little bit of a dilemma. Somebody told me an unwanted important spoiler. Obviously, I was gutted, even a little angry. But, I got over it and kept on reading.

The twists and turns of Catching Fire stunned me in a way. There were so many unexpected moments and ‘bombshells’, if you like, that I found myself sometimes stopping and letting things sink in. Although I read this book at a nice, leisurely pace, I found myself coming back to it every night and reading a bit more all the time. I preferred the narrative voice of Catching Fire to that of THG. I felt like Katniss was a bit more open and I didn’t get the initial cold feeling that I did with THG and that was definitely reflected in the narrative.

As I’d kind of said in the above paragraph, I liked Katniss more in Catching Fire. I felt that she was maybe stronger in this book, since she’s now experienced the Games and has grown as a person. To me, Katniss has warmed up a little bit, she still has a hard exterior though but I was glad that her relationship with her mother has improved.

If I had to make a choice between Peeta and Gale, I would probably go for Peeta. I like his personality more, he’s a lot more charming than Gale is and I like that in a guy. Obviously, I felt some sympathy for Gale at times, but I guess I kind of sided with Peeta more.

I have kind of mixed feelings on Finnick Odair. He seems like a bit of a snake to me, I wasn’t sure what he was up to at times. However, as the book progressed and I learnt more about him, I started to like him more, especially the more ‘secretive’ elements to him.

The pace of Catching Fire, to me, is quite varied. It is slow and relaxed in some places, tense is others, and fast in others. I felt that this was a nice balance and kept me interested and wanting more as I read, only to find that the book had ended. Oops!

Although this is a good book, I don’t think it is as good as THG. However, Catching Fire was enjoyable and made for a very good sequel!