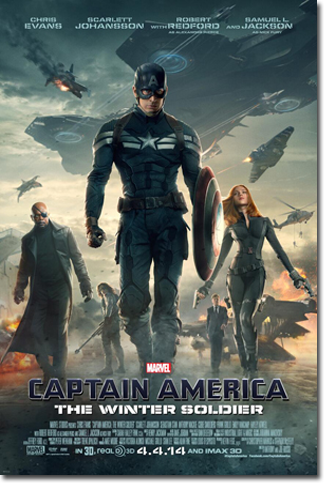 For Steve Rogers, awakening after decades of suspended animation involves more than catching up on pop culture; it also means that this old school idealist must face a world of subtler threats and difficult moral complexities. That comes clear when Director Nick Fury is killed by the mysterious assassin, the Winter Soldier, but not before warning Rogers that SHIELD has been subverted by its enemies. When Rogers acts on Fury’s warning to trust no one there, he is branded as a traitor by the organization. Now a fugitive, Captain America must get to the bottom of this deadly mystery with the help of the Black Widow and his new friend, The Falcon. However, the battle will be costly for the Sentinel of Liberty, with Rogers finding enemies where he least expects them while learning that the Winter Soldier looks disturbingly familiar.

In the past, I didn’t like Marvel at all (I blame Sam Raimi’s Spider-Man films and Fantastic Four for that) but after seeing The Avengers in cinemas, I decided to give the Marvel Cinematic Universe (or MCU) a chance and checked out some of the films (well, Thor and Captain America to be specific. I don’t particularly like Iron Man). I enjoyed the first Captain America film and made plans to see the film when it was released, and I really enjoyed The Winter Soldier (and making my dad sit through the credits) despite a couple of niggles that I had.

The Winter Soldier takes place after the events in The Avengers and sees Steve Rogers adjusting to life in the twenty-first century after being frozen for seventy years. Not only does he have to catch up on popular culture, but the way that terrorists work too as shown when S.H.I.E.L.D. is attacked. Going into the film, I didn’t really know all to much about the story so a lot of the things going on were new to me, mainly when it came to S.H.I.E.L.D. that I barely knew anything about. I really enjoyed the film’s story because it kept me on my toes and always anticipating what was going to happen next, although I was doing the common thing of guessing the next event (which is only okay when you keep it to yourself). As with every Marvel film, I stayed until the very end to see the after credits scenes and I’m glad that I did because they definitely grabbed my interest.

I’m not all too familiar with Marvel’s characters outside of the MCU because I’m a DC girl (I have a special face reserved for people who think that Superman is boring), but I do like the way that they’re portrayed by the cast in the films. As with the first film, and The Avengers, I really liked Chris Evans’s performance as Captain America. He brought not only a great amount of effort and emotion to the character, but a bit of humour too. Steve made me laugh a few times and I love the way that he handles himself when faced by many enemies at one single time. As for Black Widow, I’m glad that she was included in the film because she really showed a contrast between modern day agents, and the soldiers of Steve’s time. I’d only seen the character in The Avengers before and I didn’t like her as much as I do now, but that’s mainly because I barely knew anything about her. Scarlett Johansson gave an awesome performance as her again and I’m looking forward to seeing her again in the next Avengers film. My only issue with the characters, and I think that people may disagree with me, is that I don’t think that the Winter Soldier got enough screen time as he should have. To me, it didn’t feel like he was the main villain, but rather a puppet being used by who I thought was the main villain. And I feel like it’s a bit of a shame because Sebastian Stan gave an excellent performance, but I feel like I still don’t know the character apart from the basic facts about him.

For a film that doesn’t use as much CGI as most superhero films, the effects used in The Winter Soldier are really good. I didn’t see this film in 3D, but I may do so in the future so that I can get the full effect. My only qualm is that at times the camera went to being handheld, which is something that I really don’t like due to it making me feel nauseous and there were a few times that caused me to look at my knees rather than the screen. But, despite that one little issue, this is still a good-looking film with awesome cinematography.

I really enjoyed The Winter Soldier so much that despite the long running time, it felt like it flew by because I liked it so much. I liked the story, loved the cast, and will definitely be watching this again. However, I do think that the titular Winter Soldier didn’t get enough screen time and that’s why I think the film missed out of five UFOs from me. But other than that, I would definitely recommend this film to fans of superhero films! This doesn’t mean that I’m abandoning my beloved DC though…