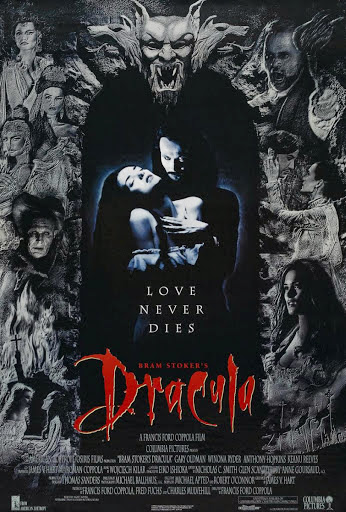 Jonathan Harker, a young solicitor, is assigned to Castle Dracula in the mists of Eastern Europe. There, he is captured and imprisoned by the undead vampire Count Dracula who travels to London, inspired by a photograph of Harker’s fiance, Mina Murray. In England, Dracula begins a reign of seduction and terror, draining the life from Mina’s closest friend, Lucy Westenra. Harker, Mina, Professor Abraham Van Helsing and Lucy’s suitors join together to hunt down Dracula and put an end to him.

The first time that I had seen a mention of this film was in the fourth Treehouse of Horror special of The Simpsons. It was in a segment called Bart Simpsons’ Dracula and featured Mr. Burns as Dracula. I didn’t really get the reference back then but I obviously do now. There are three main reasons as to why I wanted to see this film:

But seriously, I cannot gush enough about how much I love Francis Ford Coppola. Pretty much everything he does is gold. To give a few examples he directed The Godfather trilogy (my favourite film series ever), Apocalypse Now, Jack and he even directed Captain EO which is an attraction at Disneyland! Dude is so awesome this post would be too long if I talked about my feels.

I think that this film is as close to the original book as we’re ever going to get. Nearly everything that is usually missed out is included: Quincey and Arthur, Dracula feeding Mina his blood, Van Helsing placing a communion wafer on Mina’s forehead and even the convent that Jonathan escapes to and marries Mina in. Pretty much everything is in there. However, the biggest difference between the book and the film is that this film establishes Dracula to actually be Vlad the Impaler who became a vampire after his wife Elizabetha threw herself in a river after believing that he was dead. It doesn’t seem too relevant but it does because this is a romance film. Dracula believes that Mina is the reincarnation of Elizabetha. I liked how this twist was added in because it gives a reason as to why Dracula took an interest in Mina in the first place but other than that, the film follows the book as closely as possible.

Although the cast is altogether wonderful, Gary Oldman and Anthony Hopkins are definitely the strongest players in the film. First of all, Gary Oldman. I liked how he portrayed Dracula in a more three-dimensional manner. He has the dark, violent side but he also has the mysteriously romantic and even erotic side in there as well. I also loved how although the character goes through a couple of drastic changes in appearance (when Harker visits him, he is an incredibly old man and gets younger as the film progresses) he still retains the somewhat suave personality. I have seen people call this portrayal as “weak” and even “wussy” because Dracula is motivated by love for his dead wife. I’m sorry, but being in love does not make a man a wuss or weak. I actually liked that he is motivated by love; it gives a reason as to why Dracula had taken an interest in Mina. So far, Oldman’s portrayal is the best that I’ve seen and even my favourite because it is so incredibly accurate.

I loved Antony Hopkins’ performance as Abraham Van Helsing. He also played the character in a way that is incredibly true to the book and the character was the eccentric professor/vampire hunter that he really is because, let’s face it, if he turned out to be kidding, Van Helsing would look like a complete nutjob. The accent that Hopkins did sounded more German than Dutch but that’s okay because it goes unnoticed if you don’t know the difference between the accents.

I hate to say it because everything is going so well so far, but I think that Keanu Reeves and Winona Ryder are the weakest elements of the film. It was quite obvious that they had to put on English accents for their roles are Jonthan and Mina in which the intonation mainly stayed the same. They both had a look of bewilderment on their faces most of the time which is sort of characteristic of the Harkers since they spend quite a lot of time being confused and not knowing what is going on. Sorry guys.
I absolutely loved the set design of the film. The sets themselves compliment the costuming which is also just amazing. The sets really look like they’re from 1897 and give the film quite a dark feeling in certain scenes and look quite bright in others. The typical gothic colours are used here (red, black and white) but there are also colours with certain connotations present, such as Mina’s dresses usually being green, which in some cultures repsents lust. See that? Symbolism.

One of the things that I really love about Francis Ford Coppola’s films is his refusal to use CG effects and prefers to use more primitive methods. A couple of examples are using projections onto the actors’ faces and even using shadow puppets at times. It sounds like it would look like crap but it works incredibly well and actually looks better than CG works would. There are things that CGI can’t do that makeup can. The one thing that bothered me is the amount of blood that is used, especially when Lucy is being turned into a vampire. Although I don’t think blood would usually explode out of the bed-sheets hen someone is becoming a vampire…

This is only the second Dracula film that I have seen so far and already it’s my favourite. There are just so many things that I love about this film and the fact that it’s so close to the book makes it nearly perfect. Dracula actually being Vlad the Impaler was a nice twist but a couple of cast members gave quite weak performances. Other than that, I absolutely loved this film so much that I’ve created a new film rating!