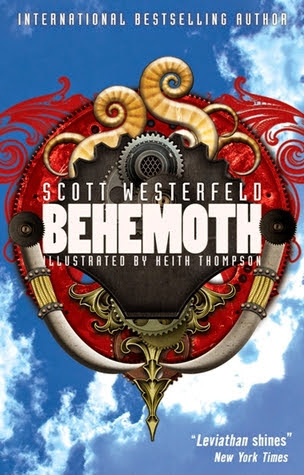 The behemoth is the fiercest creature in the British Navy. It can swallow enemy battleships with one bite. The Darwinists will need it, especially now that they are at war with the Clanker powers.

On board the great airship Leviathan, Deryn, a girl posing as a boy, and Alek, the secret heir to an empire, are waiting to deliver a hidden cargo they hope will end the war once and for all. But their mission goes disastrously awry, and they find themselves hunted in hostile territory. As the lines between allies and enemies blur, Alek and Deryn will need brave hearts to face the consequences that follow…

I’ve finally gotten to read Behemoth! I remember being giddy with excitement over this book back in 2010 when it was to be released but never got round to reading it because I relied a little bit too much on the school librarian back then and never really bought my own books (bad idea because I don’t know if they ever ordered it in). So I pretty much spent three years sort-of wondering what would happen next in the series and also half forgetting about the series >.< Leviathan is one of my favourite books ever now so I think it’s safe to say that my expectations for Behemoth were incredibly high. Those expectations were met, but I haven’t put the book on a par with its predecessor.

Behemoth continues on a few days from where Leviathan left off, with the airship travelling to Constantinople (Istanbul) to deliver Dr. Barlow’s secret eggs to the sultan which they hope will help to bring the war to an end. Deryn, whose secret has thankfully not been discovered, joins Dr. Barlow on the mission which goes horribly wrong, while Alek and his Clanker team make plans to escape from the airship and into Istanbul. There isn’t as much action going on in Behemoth as there is in Leviathan but that’s actually alright since the book sort of serves as a break from tons and tons of action which can sometimes made me feel a little bit overwhelmed. I was constantly itching to know what creatures were inside Dr. Barlow’s eggs and even though they do hatch in the book, the creature itself that hatches is still a bit of a mystery and I’m still itching to know what exactly it is and what it is supposed to be used for (it is a Darwinist creation after all, and they use their creatures as tools). Despite the pace of Behemoth being a bit slower than that of Leviathan’s, there is still a lot going on in the book, even if it isn’t exactly high-octane action. Because I was reading the book for the first time, I was treated to experiencing the book’s suspenseful, exciting and even surprising moments for the first moment and even angering myself by catching a glimpse at one of the more ‘revealing’ illustrations while checking the number of pages in the book to track my progress (-_-).  Alek and Deryn are separate again so the story flits back and forth between their two perspectives quite smoothly, as it did in the previous book. Once again, I had no problem following what was going on and who the chapters were focusing on, thanks to Westerfeld’s way of differentiating between the two within the narrative.

In Behemoth, we get to see quite a bit of character development, especially with Alek and Deryn. Out of the two, Alek appears to have grown the most. He’s somewhat outgrown his princely demeanour and become braver, since for the most part, he has been placed in charge of his own rescue operation, with Count Volger and Hoffman still on the Leviathan. It was really awesome so see Alek grow and mature in such a short space of time (well, it’s a matter of months in the book but it’s short for me) and he’s no longer in desperate need of that comforting hug that I wanted to give him while reading Leviathan. I also really enjoyed seeing him interact with the people in Istanbul, since he didn’t have Volger to tell him to keep his head down and shut up, and also since people are on the lookout for Klopp and Bauer, since they are mechanikal engineers. Even though Alek was already a really likable character, the way that he has grown in Behemoth has made me like him even more. The way that Deryn was developed was a little bit odd, she got tougher and a smidge softer at the same time. She gets tougher in terms of becoming even braver than she was in the first place, since she does even more things by herself without any command and just really shows off how bad-ass she truly is. She shows a little bit of a soft side because as the book progresses, it becomes increasingly more obvious that they may be harbouring some feelings for Alek. I seriously hope she does because it’s so cute how jealous she gets of other girls who talk to him >///<

The only little thing that made Behemoth not be on par with Leviathan is the fact that book is consistently set in the same place pretty much all the way through. Although I really liked the Istanbul setting and reading about how Westerfeld envisioned a Clanker version would look and feel during wartime, I felt at some points in the story that it was time to move away from the city and travel to a different setting, similar to how Leviathan does. The setting is probably the reason why the story doesn’t move at the same pace as Leviathan. But, the lack of travelling aside, I imagine that Istanbul is a pretty big city, so at least we were able to see different parts of the city, rather than just staying in the same part all the time! Hopefully I can look forward to more travelling settings in the next book.

I still cannot comprehend how awesomely amazing Scott Westerfeld’s writing is. Seriously, it is just so perfect. I think I’m going to start fangirling over his writing style, but I think I’m entitled to since it’s so good. His descriptions really bring the book to life and then on top of that, they’re complimented by the beautiful illustrations that add even more character to the books in the series. In Behemoth, we see a lot more of the Clanker machines than Darwinist creatures so it was fascinating to visualise what all of these new machines that were being introduced would look like. I honestly think I liked reading about the machines more than the creatures that were more prominent in Leviathan, since the steampunk genre is usually defined by these types of intricate machines rather than natural (or even unnatural) beasts. I also really loved the descriptions of how 1914 Clanker-influenced Istanbul looked and being able to picture that in my mind too. That’s what I love the most about Westerfeld’s writing: it allows the imagination to really wander and paint its own pictures.

While I was very, very, incredibly impressed by Behemoth, it wasn’t as earth-shatteringly awesome as Leviathan was. On my theoretical scale of awesomeness, Leviathan is up at the very top, whereas Behemoth is about an inch underneath, so I’m giving it five stars. I am really geared up for the final book in the series! Get it? Gear? Because this is a steampunk series? Ah, forget it.