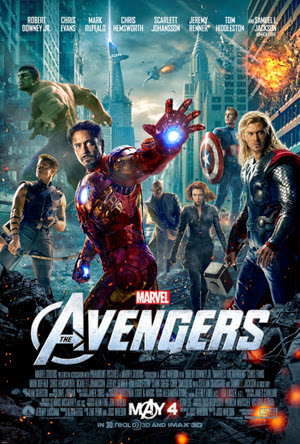 Nick Fury is director of S.H.I.E.L.D, an international peace keeping agency. The agency is a who’s who of Marvel Super Heroes, with Iron Man, The Incredible Hulk, Thor, Captain America, Hawkeye and Black Widow. When global security is threatened by Loki and his cohorts, Nick Fury and his team will need all their powers to save the world from disaster.

Before I start this review, I am going to say that I have never been a fan of Marvel Comics. I’m a DC girl myself . I did tell myself when I heard that this was being released that I wouldn’t go see it. However, the trailer completely changed my mind.

I love the idea of heroes getting together to defeat the “ultimate” evil (which is why DC’s Final Crisis TPB was amazingly good in my opinion) and I really liked how the story was told in the movie. The movie doesn’t start with the team already composed, Fury and Black Widow have to hunt around the world for Bruce Banner (Hulk), Steve Rogers (Captain America) and Tony Stark (Iron Man) to join the team and get Hawkeye back from the movie’s villain, Loki who is Thor’s brother. What I also liked about the narrative structure is that the fighting doesn’t start off really early in the movie, it eases into it bit by bit, which really got me all geared up.

As I said above, I’m not a Marvel Comics fan, so I’m not too familiar with their characters (the only character I’m a bit familiar with is Spider Man). But I’m glad that Wheadon chose the characters that were featured, because they were all kinds of awesome.

I love the arrogance that Robert Downey Jr. brings to Tony Stark/Iron Man. Even though he is a hero and risks his life to save people, he is a bit of a prick because he has the money to throw around and ultimately be a prick.

Clark Gregg’s character Phil Coulson really made me laugh. He is pretty much a Captain America fanboy. Baseball cards, constantly telling Cap how much he admires him and that he is his favourite hero? Fanboy. I’d probably do the same thing though, because Captain America is pretty cool for a guy with wings on the sides of his head.

My favourite character in this movie is definitely Bruce Banner/Hulk. I loved the contrast between the meek Banner and the, well, angry Hulk. I think that Mark Ruffalo is the best Hulk that I’ve seen, the movie would have been different if Edward Norton had decided to sign on. After seeing this movie, I think that the Hulk is more than likely my favourite Marvel hero, the way he smashes through this is just awesome. Also, I love how Ruffalo’s and Lou Ferrigno’s voices were combined to create the Hulk’s voice for the few times that he speaks. HULK SMASH!

Although he was a great character, I think that Loki is a little bit hyped up. A lot of people (mainly girls) feel sympathetic of him, just because he’s a pretty face. The dude is frigging malevolent, don’t feel sorry for him (I think it’s obvious that malevolent is my favourite word)! However, I can see why some people would feel sympathy for him because he’s the perhaps unloved adopted brother who wants to be worshiped.

I really liked how there was more than one location in the movie, it felt almost international in a way because most countries in the world are affected by Loki’s attack. The way that the setting shifts from country to country really made the movie feel like a journey and we even go into outer space. And we all know how I feel about going into outer space.

There is far too much for me to say about the special effects. The special effects of this movie are amazing. Seriously. I wish that I had gone to see this in 3D but I’m a complete fanny about 3D (it gives me headaches and I didn’t want to pay an extra quid for the ticket and then another quid on top for the glasses). If I do go see it again, it will be in 3D. There is a hell of a lot of CGI work going on and I’m not usually a fan of movies that incorporate a large amount of CGI but it works so well here because the creatures and destruction looks so realistic. Eyegasm!

This movie was so great that I want to send Joss Wheadon a letter telling him how much I love him for making this and changing my mind about Marvel. Everything about this movie is amazing; the action, the characters, the cast and the effects. Everything is just so good! I’d highly recommend going to see this in the cinemas before it’s too late. If you can get a seat that is…