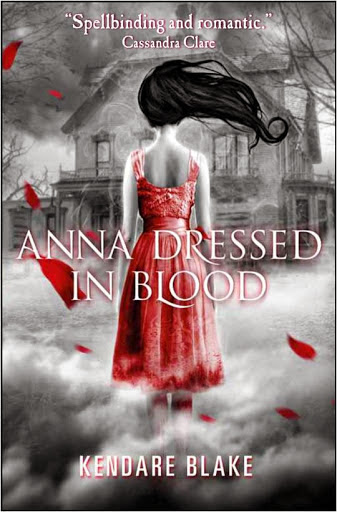 Cas Lowood is no ordinary guy –
he hunts dead people.
People like Anna. Anna Dressed in Blood. A beautiful, muderous ghost entangled in curses and rage. Cas knows he must destroy her, but as her tragic past is revealed, he starts to understand why Anna has killed everyone who’s ever dared to enter her spooky home.
Everyone, that is, except Cas…
Just your average boy-meets-girl, girl-kills-people story.

I’ve never really been a fan of ghost stories, mainly because I scare very easily. Before reading Anna Dressed in Blood, the only ghost books that I’d read and enjoyed were the books in Meg Cabot’s Mediator series which aren’t really scary. However, I did see reviews on this book going around quite some time ago now (I’m incredibly late with this >.<) and I decided to give it a try and see what it’s all about. With the word ‘blood’ in the title, I was expecting a fair bit of the red stuff itself and boy did I get that.

Anna tells of Cas (full name Theseus Cassio Lowood), a ghost hunter who travels around with his Wiccan mother searching for ghosts to kill. After his recent success, Cas and his mother move to a new town in Ontario in order to kill a ghost named Anna Korlov, a.k.a Anna Dressed in Blood. Armed with his father’s athame, Cas finds that his mission will be more difficult than he expected when he witnesses Anna’s power. I absolutely loved the story of the book; it is probably the most unique horror story I have ever read. All the way through the book, I was kept interested and wanting to turn the page to find out what would happen next. My definite favourite moment of the book is when we first see Anna’s power and she performs a Mortal Kombat-esque fatality on Mike, one of the meaner kids in town (click for video, but not advised for the faint of heart). Seriously, my mind said ‘Anna wins. Flawless Victory. FATALITY!‘ when it happened. I loved the way that the story was told; the amount of tense moments almost left me with no fingernails. The scary moments of this book are scary.

What I liked the most about Anna is the characters, especially Cas. I really enjoyed reading from his perspective due to his witty voice that provides both atmosphere and humour to the appropriate moments. I don’t think the book would necessarily be the same if Cas wasn’t the narrator and his narration is what I think makes the book very unique. I don’t think I’ve read many YA books with male narrators, but I think I obviously need to seek out some more since this was a nice change from having a female narrator or an omniscient one. All of the characters of Anna are very well-constructed and believable, which made reading even more enjoyable. I think if I had to pick one specific thing about the characters that I liked is that they’re not clichéd in anyway at all, even if they initially seem like they are, they quickly turn around and show you that they’re not.

I could bang on and on about how unique this book is, but I’ll tell you what’s really unique to me: before reading Anna, I had never read a book that was set in Canada. Not a single one. Not a YA book, nor an adult book. Most of the books that I have read are set in either the US or England so it was an incredibly nice change to read a book set in a different country to most YA books. I loved the descriptions of Thunder Bay and especially of Anna’s house. The descriptions really set up the creepy atmosphere that occurs when the characters enter the house and I could almost feel how haunted the house was through the description.

Holy fudgecicles, this book was awesome. I don’t think there is anything more I can say other than that. I loved every second of this book and I really didn’t want to put it down at all. Unfortunately for little old me sitting here in the UK, I have to wait until next month for the second book in the series but I am eagerly anticipating it!