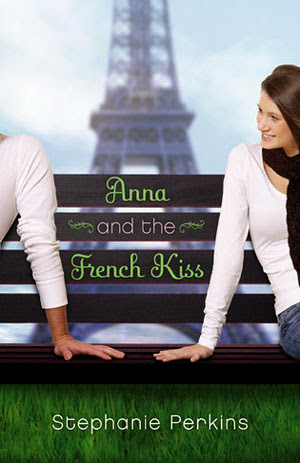 Can Anna find love in the City of Light?

Anna is happy in Atlanta. She has a loyal best friend and a crush on her coworker at the movie theater, who is just starting to return her affection. So she’s not too pleased when her father decides to send her to a boarding school in Paris for her senior year  But despite not speaking a word of French, Anna meets some cool new friends, including the handsome Étienne St. Clair, who quickly becomes her best friend. Unfortunately, he’s taken – and Anna might be too. Will a year of romantic near misses end with the French kiss she’s been waiting for?

I’m not the world’s biggest fan of contemporary romance. A book that is about regular humans falling in love usually won’t spark my interest unless it has something that seems extra special to me. With Anna and the French Kiss, the fact that the book is set in Paris (my favouritest place in the whole wide world) is what sparked my interest. If a book has anything to do with Paris (or even France as a whole) I am completely sold. Plus, I’d seen quite a lot of people raving about how good the book is so I’d picked it up as soon as I’d spotted it in a bookshop. I’d prepared myself to enjoy the book since I was in the mood for something light-hearted and I really wasn’t disappointed.

Anna and the French Kiss tells of Anna Oliphant (cleverly nicknamed ‘Banana Elephant’ by her best friend Bridgette; but only Bridge can call her that) who has been sent to an American boarding school located in Paris, by her father who writes clichéd novels that always end in death. While at SOAP (School of America in Paris), she struggles with language barriers and explores the City of Light with her new friends: Meredith, Rashmi, Josh and the incredibly charming Étienne St. Clair. St. Clair has it all: looks, intelligence, charms… and a girlfriend. However, that doesn’t stop Anna and St. Clair from becoming the best of friends and maybe even having deeper feelings for each other. What I loved the most about Anna’s story is that while it is sweet and breezy, there is always something going on that keeps the story going strong. Even though it’s not the fastest moving of novels, every event that happened in the novel had its own element of surprise and excitement that would catch me off guard and make me want to continue reading on. I couldn’t put the book down since I kept wanting to know what would happen next and because the story is pretty easy to follow, I was able to get through a lot of the book in one day.

The strongest element of Anna and the French Kiss is definitely the characters. I loved how lively and real they were and made reading the book even more fun and enjoyable than reading already is. Anna is probably one of my favourite YA characters ever now because of her genuine personality which I just loved. She’s very well-rounded so she’s not always happy or always sad, which is just like real people are and I really like seeing characters who experience a full spectrum of emotions rather than just one or two that are similar to each other. I think one of the many reasons why I liked her so much is because she really loves cinema, just like I do and I always feel like I can relate to a character more if I have things in common with them (although with Anna it’s just that we both like film, there’s nothing else that I have in common with her) and I loved reading about what she thinks of films and who her favourite director is (Anna’s favourite director is Sofia Coppola, while mine is Sofia’s father, Francis Ford Coppola). Another thing that I like about Anna is that when she’s done something wrong, she doesn’t think nothing of it, she knows that she’s done something wrong, especially when it comes to stuff that happens with St. Clair. Smart girlie is smart and I love her for that.

I think I am a new addition to the Étienne St. Clair fan club if it exists. I’m not usually a fan of fictional boys that are described to have a ‘British’ accent (I’m surrounded by British boys every day and the vast majority of them are pretty gross) but St. Clair is actually American, so that makes him better in my view ^_^ What I really like the most about St. Clair is that from the first point that he is introduced, he is just the nicest guy in the world. Why is it that in YA fiction, the hot boy is usually introduced as a total douchebag but then gets nicer as the book continues? Really, after reading Anna and the French Kiss I want to see more boys that are introduced as nice and then continue on with being nice. St. Clair is pretty much a faultless boy and I just want him to be mine, so everyone else can just give him to me. Please? No? Fine *pouts*

The setting of Anna and the French Kiss is what made me pick up the book in the first place. Paris is my absolute, undisputed favourite place in the entire universe and reading this novel reminded me of how much I want to go back there (I actually am going to Paris this summer ^_^). I loved being taken to all of the essential destinations of Paris along with Anna and also to some parts of the city that I haven’t been to and now must go to. I also love how accurate Perkins’ descriptions of Paris are; I don’t think it could have been any more accurate than it already is.

Anna and the French Kiss is told in the present tense from Anna’s perspective and there is not much I can say other than the fact that I loved it. Perkins has given her narrator a highly entertaining voice that sounds very realistic while reading. I am just in complete and total love with the way that Perkins has written this book; Anna’s narrative is fun and on top of that we get beautiful descriptions of Paris and its surroundings which are very accurate. I seriously cannot rave enough about how perfect it is!

Sweet and undeniably cute, Anna and the French Kiss has definitely made me think twice about contemporary romance. I’ll definitely give the genre a chance since I enjoyed this book so much. There was always something going on with the incredibly likeable characters in Anna’s story and I just had to keep going through the book because it was just sooooo good. I love Perkins’ writing and I will definitely reading Anna’s companion novels!