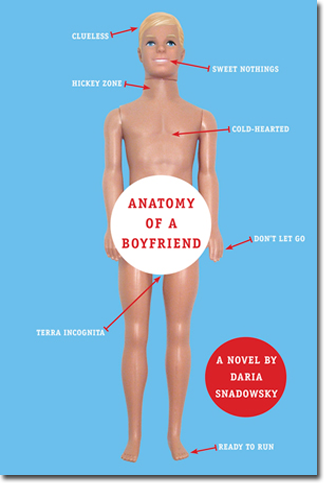 Before all this happened, the closest I’d ever come to getting physical with a guy was playing the board game Operation. Then I met Wes, a track-star senior from across town. Maybe it was his soulful blue eyes, or maybe my hormones just started raging. Either way, I was hooked. And after a while, he was too. I couldn’t believe how intense my feelings became, or the fact that I was seeing – and touching – parts of the body I’d only read about in my Gray’s Anatomy textbook. You could say Wes and I experienced a lot of firsts together that spring. It was scary. It was fun. It was love.

And then came the fall.

Before I had to stop blogging, I had seen the Anatomy series popping up quite frequently around the blogosphere, but it never really sparked my interest due to me not really being into contemporary as much as I am now. And then one day, I read a couple of reviews and ordered a copy where it sat on my shelf until a few weeks ago when I acquired a taste for contemporary novels. I’ve always found books that deal with more mature subjects to be more interesting and sometimes more realistic. Anatomy of a Boyfriend definitely fit into the category of realistic contemporary due to its subject matter and execution, and I really enjoyed reading it.

Anatomy of a Boyfriend tells us about Dominique, and her first serious relationship with track star Wes, which soon starts to turn sexual. I thought that the story progressed at quite a steady pace, which was more than okay with me because these kinds of books don’t need to be action-packed to be exciting. I think the most interesting part of the story as a whole were the sex scenes, mainly because they weren’t anything like any other sex scenes that I’ve read. Instead of being erotic and steamy, they were awkward and anatomically accurate, which I found to be quite realistic for a first-time relationship. Not everybody knows exactly what to do and it’s both scary and exciting at the same time, and Anatomy captured that feeling perfectly. However, there were a couple of moments towards the end of the book that left me thinking “what just happened” and I needed to backtrack a couple of pages to see whether I’d missed anything. Apart from that, I thought the story was great but I do wish that I’d read this book a long time ago because knowing that the sequel exists, kind of spoiled the ending for me. Whoops. But it can’t be helped though.

I think the element that made Anatomy of a Boyfriend as great as it was was the characters and how three-dimensional they were. I couldn’t really relate to any of the characters, but that’s not necessarily important because I know people who have been in these kinds of situations. Dominique was a pretty complex person, to the point that sometimes I liked her and other times I didn’t. At the beginning of her relationship with Wes (the whole flirting as friends stage), she got on my nerves a bit and was almost like a female version of the much disliked ‘nice guy’. She felt like she should be rewarded with sex just for being friendly to Wes. While most relationships start off as friendships, most people don’t give out sex as a thank-you-for-being-my-friend present. A lot of the time she was unreasonable and selfish, which she totally wasn’t before she ended up with Wes. However, there were times when I felt quite sympathetic for Dom, despite not being able to relate to any of her problems at all. She both frustrated me and made me feel for me, and that’s what I think makes her such a great character because real people are like this. In fact, this realistic feeling really contributed to how believable Dom and Wes’s relationship was. There are quite a few books that deal with first loves being the greatest, most romantic thing ever, when they’re actually more like Dom and Wes’s: pretty awkward.

While sex isn’t a subject that I’ve had hands on experience with (get it? hands on? look at me making dirty jokes in a review!), I do feel like I have enough knowledge (and cynicism) to know that first-time sex isn’t like in films, TV, other books, or even, I do dare say, porn. It’s pretty awkward, especially if both parties are inexperienced like Dom and Wes are, and I’m really glad that this book showed first-time sexual relationships in this way because, like I’ve said quite a few times now, it’s how it actually is. And I’m mainly glad that the book has such a blunt and accurate portrayal of teenage sex because there are so many teens who still don’t technically know what sex will be like or even technicalities (like the fact that your first time isn’t supposed to hurt unless there’s something going on with your parts or you’re just not ready), so books with themes such as these can be kind of important.

Overall, I really enjoyed Anatomy of a Boyfriend. I enjoyed both the story and the characters, and I really enjoyed the way in which the usually mature theme of sex was executed. I’ll definitely be reading the sequel!