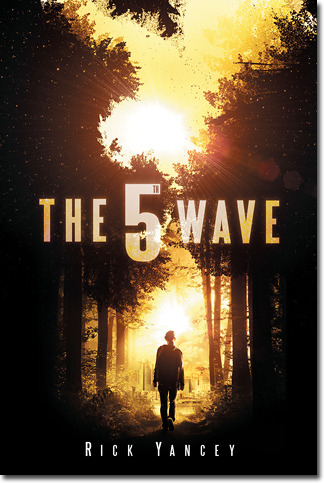 Now, it’s the dawn of the 5th wave, and on a lonely stretch of highway, Cassie runs from Them. The beings who only look human, who roam the countryside killing anyone they see. Who have scattered Earth’s last survivors. To stay alone is to stay alive, Cassie believes, until she meets Evan Walker. Beguiling and mysterious, Evan Walker may be Cassie’s only hope for rescuing her brother—or even saving herself. But Cassie must choose: between trust and despair, between defiance and surrender, between life and death. To give up or to get up.

The 5th Wave is the book that I’ve seen getting a lot of hype around the blogosphere recently, but I usually don’t pay attention to books while they’re being hyped up unless there’s something about it that just screams ‘read me now, not later!‘ Do I even need to say what it was about The 5th Wave that made me run out and buy a copy? ALIEN INVASION! My good ol’ friends the aliens are just far too cool for me to turn my back on and I haven’t had any malevolent aliens recently (just a lot of coexisting somewhat peacefully). With all of the positive reviews that I’ve seen recently, it’s safe to say that I had incredibly high hopes for The 5th Wave. Those hopes were satisfied so much that I can’t even begin to comprehend it.

The 5th Wave tells of an alien attack on Earth that has so far taken place in four stages, or ‘waves; in the first wave, the world’s power was cut; the second saw entire cities flooded and billions of people killed; the third had people being infected with a horrific disease that ended with blood violently expelling from the body; the fourth wave left people no longer being able to trust one another. And the fifth? Nobody knows yet, and that’s the frightening part. We’re introduced to Cassie (short for Cassieopeia) whose life is completely transformed by the apocalypse. Her mother was taken by the 3rd wave and her father has taken her and her little brother Sammy to a camp where they’ll be safe. After Sammy is taken to a military camp where they’re told he’ll be even safer, Cassie promises to return to him. What I loved the most about The 5th Wave is that it kept me interested all the way through, even during slower parts. It was exciting, tense and thrilling to the point that I wished it could have gone on forever. Unfortunately, the world doesn’t work that way, and the book had to end. Wah. The story doesn’t just focus on Cassie, there is a second POV that I’m not going to say much about because I want to keep this as spoiler-free as possible. I love how this second story is in the book because I honestly don’t think that the book would have been as awesome if it has just focused on Cassie. I really liked being able to see the apocalypse from another person’s point of view.

Speaking of Cassie, this girlie is just so freaking awesome. Seriously, she is such a badass that she’s probably one of the best female protagonists that I’ve read this year. Maybe even ever! I love how she doesn’t take any crap from anybody and keeps a cool head throughout everything, no matter how dire the situation. I loved her determination to return to her brother and how she didn’t let anything get in her way. I don’t think I could say enough about how much of an awesome protagonist she is. Other than Cassie, I liked pretty much all of the characters in the book. They were very well fleshed-out and felt natural to read. And also, Evan is pretty hot. That is all I have to say on that matter.

I loved the aliens of The 5th Wave, they were done so well! I loved that we sort of don’t see the aliens at all, but their presence is felt all the way throughout the book. I always feel that the ‘monsters’ in something are more frightening if you don’t see them, compared to if they were there all of the time. However, I haven’t read or seen much stuff where aliens aren’t seen because a lot of things with aliens feature creatures that are so original that they almost need to be shown. But, not seeing them definitely adds to how tense the book feels, and it gets pretty tense at times.

Gah, I don’t think I can praise this book enough. I loved everything about The 5th Wave, it was so exciting! The story was thrilling, the characters were awesome and everything was just so perfect. I’ve been left with a pretty bad book hangover here and the next book in the series isn’t out until summer next year. I want it now! But, the world doesn’t work that way so I’ll definitely be revisiting The 5th Wave.