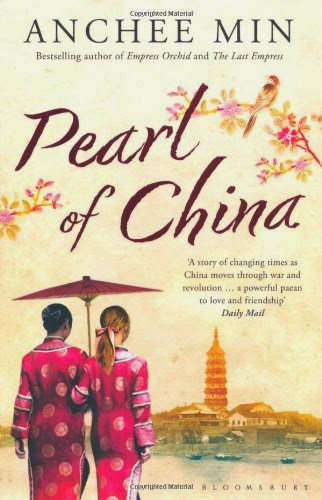 In the small southern town of Chin-kiang, two young girls from very different worlds collide and become inseparable companions. Willow is hardened by poverty and fearful for her future; Pearl is the daughter of a Christian missionary who desperately wishes she was Chinese too. Neither could have foreseen the transformation of the little American girl embarrassed by her blonde hair into the Nobel Prize-winning writer and one of China’s modern heroines, Pearl S. Buck.

When the country erupts in civil war between the Nationalists and the Communists, Pearl’s family is forced to flee the country and Willow is punished for her loyalty to her ‘cultural imperialist’ friend. And yet, in the face of everything that threatens to tear them apart, the paths of these two women remain intimately entwined.

For once, I did something that I don’t usually do; I went into a bookshop and looked for something that sparked my interest (a lot of people do this, but I tend not to for some reason). I had a look around the shelves in W.H. Smith’s and this caught my magpie eye (I’m not a Geordie, by the way) because the title is written in a shiny material, which is something that I like.

The cover is incredibly pretty. I’m not a fan of the colour pink, but it works pretty well here. The pink dresses add a pop of colour to the cover. I love how the art is in the traditional Chinese style, as well as the landscape in the background. If the title wasn’t on the cover or the spine, I would’ve known instantly that the book is set in China.

Although the synopsis is a bit off-putting for some people (Christianity and politics at the same time), I have a thing for books based on real-life events, but I can’t stand autobiographies and biographies. The element of real-life events being entwined with fiction really interests me and even makes me curious. I’ve never heard of Pearl S. Buck, but that’ll probably make my reading experience more enjoyable.

The plot of this book was incredibly engaging; I was glued to reading and couldn’t put it down. I usually read at least two chapters a day, but with this book I was reading six chapters a day. The first chapter is quite slow, since it simply sets the scene, introduces characters and gives a back story. It does speed up by the second chapter. Some moments in the novel were incredibly tense, especially the Nanking Massacre scene. The tension and suspense of the story made the book even more enjoyable. I love it when a book has me on edge and this book achieved that perfectly.

Out of all the characters, I loved Willow the most (she narrates the novel and is the main character). I love how she is able to stand up for herself in times when it is incredibly likely that she will be killed. I like strong female characters and the way Min had written her shows that women can be strong and not depend on their husbands at all times. I liked how she never lets her friendship with Pearl waste away and die or reject her to save herself.

Since Pearl was actually a real person, my opinions of her might not be true. But, she also appears to be a strong female character, although she is a little bit fragile, especially where her daughter Carol is concerned (Carol has phenylketonuria, so she is classified as being mentally retarded). I found it quite sad that she doesn’t have a strong bond with her father, who is too busy doing “God’s work” but her persistence and determination is admirable.

Madame Mao (Jiang Qing) has been written to be quite a vile creature. She is her husband’s advisor, believes that she is one of the most important people in China and that she is married to a God. The way she treats people is, I consider, to be completely unacceptable. It’s almost as if she has a complete disregard for human life.

Absalom, Pearl’s father, infuriated me at a few points. He’s a Presbyterian pastor and manages to convert the entire town of Chin-kiang. Usually, I wouldn’t mind that but it’s the way he does about it. All Christians believe that you must put God before everything, but completely abandoning and ignoring your family for God is quite bad. He was quite an annoying character, in my opinion.

I loved the backdrop of rural China. It seemed the lot more peaceful than the cities featured in the novel (Beijing and Nanjing). I found it interesting to read about how China transitioned from being an Imperialist country to the Communist state is is today and its effect on the Chinese people. For some reason I pictures Nanjing (called Nanking in the novel) to be quite a small city and even a bit on the rural side. All of the settings are described beautifully and are given a good image of what they would have looked like in the early 20th century.

I’m not really a fan of religious and political themes, but that’s mainly because books with those themes have the intention of converting the reader or persuading them to follow a revolution of some sort. However, the two themes tie in very well here as it shows how people were not able to think for themselves and those who did would be persecuted for it. I was actually quite appalled at how Mao brainwashed his followers (especially children into believing that he was their God and that anyone who is not Chinese or doesn’t support the Communist Party is the enemy. Above all that, the theme of friendship stands out the most and I felt that that was the most important one.

I really liked Min’s writing style. She doesn’t beat around the bush too much with fancy descriptions or add too many pathetic fallacies (which I actually like when they’re used properly) or even start her chapters in an annoying repetitive style. Her descriptions are beautiful and the imagery is fascinating. You really get a good picture of what the landscapes look like.

I really enjoyed this book. The writing style is beautiful and quite a few of the characters are likeable. I haven’t read many books about China or read anything about Pearl S. Buck and this was an incredibly enjoyable read.