Top 10 Tuesday a weekly meme hosted by The Broke and the Bookish. Click here for the list of prompts.
Next week will be my six year blog anniversary (good grief) so this week’s prompt got me to really thinking. I’ve read a lot of books since I started blogging in 2011 and my memory is not even worth having because it’s so terrible, so thinking of books that I loved back then was quite difficult. It also took quite a bit of looking through my Goodreads shelves and now my brain is tired, nostalgic, and putting me through a brief existential crisis all at the same time. Thinking about the past freaks me out so I try to not do it very often 😅
Also, I wasn’t sure about whether to make this list books I loved before I started blogging or books I loved in my first year, so I’ve compromised and gone for books I loved in my first year and a half of blogging. That is a compromise, right? Right?? I don’t know. My brain is very tired friends, I write my posts in the middle of the night so I haven’t slept and need a lot of caffeine. 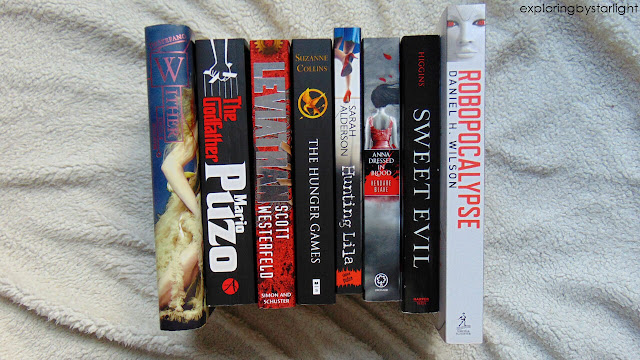 Anna Dressed in Blood by Kendare Blake – Before I read this book I was not a fan of horror books at all. I didn’t like anything scary unless it was over forty years old and had not aged very well, but this book converted me, and even though horror isn’t my favourite genre, I do still have a love for things that are creepy and eerie. And maybe a little bloody. I’ve read both books in this series and loved them both, and I’m actually considering rereading them for Horror October, even though I usually have a “no rereading” rule for themed months.
Hunting Lila by Sarah Alderson – Does anybody else remember when bloggers used to have a “more than five stars” kind of rating, because I used to have one at one time, and this was the first book that I ever gave that rating to. I actually went and ordered the sequel as soon as I knew it was out, but unfortunately never read it. It’s actually been such a long time since I read this book that if I do want to read the second book, I’ll have to reread the first one.
The Hunger Games by Suzanne Collins – I’m writing this post three days in advance but I think I might be seeing this book on a few people’s lists. I was a little late to The Hunger Games because I didn’t know anything about it until the movie was about to come out so I read it in preparation for the movie. To this day I still think that the first book was the best in the series because I didn’t like the second one as much, and then Mockingjay was a complete trainwreck of a book for me.
Leviathan by Scott Westerfeld – Hello, favourite book in the whole world. I have actually read this book twice: once when I was at school, and again a little while after I’d started blogging. I’ve been a fan of Scott Westerfeld’s books since I was eleven and would even read his shopping list, but Leviathan has a very special place in my heart because it was the first steampunk book I’d ever read and had me captured since the first page.
Robopocalypse by Daniel H. Wilson – Before I read this book I wasn’t well-versed in adult sci-fi; in fact, I hadn’t read an adult sci-fi book in my entire life so I’m a little surprised that I wasn’t intimidated by this book at first. Like every book on this list, it’s been a long time since I read Robopocalypse (i’m an old blogger now, friends) but I do remember being very impressed with what I’d read and wanting to read more adult sci-fi novels. I almost died when the sequel was announced, which I do have but still haven’t read it. There’s always November though.

The Godfather by Mario Puzo – I know that it’s a bookish sin to read the book after watching the movie, but consider this: I was fourteen when I first saw The Godfather and didn’t know that it was based on a book, which I then read when I was sixteen. Was I too young to read it? Probably. Did that stop me from liking it? Not at all. The book and the movie are almost the same as one another, with a few omissions (Sonny’s mistress moving to Las Vegas and Johnny Fontane’s career are cut out, while the chapter about Don Corleone’s life is half of the plot of the sequel), and of course I couldn’t get the movie cast out of my head while I was reading it, but that would have happened even if I hadn’t seen the movie.
Wither by Lauren DeStefano – If this post is telling me anything, it’s that I am terrible at finishing series. The wait between the second and final books in this series was so long that I kind of forgot about the whole thing. Oops. When this book first came out I did love it but it wasn’t without it’s issues. The whole idea of kidnapping, forced brides, and teen pregnancy is horrifying but done well, but my main issue was the world building because it just didn’t make a lot of sense to me. The whole world apart from North America is underwater but they still manage to have natural resources that don’t grow in North America? Alrighty then. I do plan to finish the series for Sci-Fi Month this year, but I probably won’t be rereading the first two because my TBR is already big enough.
Forgotten by Cat Patrick – I haven’t read a Cat Patrick book in the longest of times and I actually kind of miss reading them (goodreads is telling me that her last book was published in 2014) because they way they have twists and reveals is so cool. Forgotten was the first book I read by her and it was a fast favourite of mine because it was such an original story to me. Heck, it still is because I have yet to read another book with a story like it.
Jenny Pox by J.L. Bryan – Either I’m not following the right blogs, but I feel like indie authors don’t get a lot of love anymore because I hardly see them get promoted anymore. Admittedly, I’ve never been a big reader of indie authors, but J.L. Bryan was a favourite of mine for a long time because his books are so imaginative. Jenny Pox is another book that I loved but never read any of the sequels to, which I will get around to someday because my name is in the acknowledgements of some of J.L. Bryan’s books and I feel the least I can do is continue to read his books.

Sweet Evil by Wendy Higgins – It feel like forever ago that I read this book, probably because it was. I read this book back in 2012 when it was first published and while I did love it, I still haven’t read the rest of the series. I was really big into paranormal romances way back when because that was one of the big trends but obviously that love of the genre has kind of fizzled away. I tried to read more, ahem, adult PNR books but they just didn’t do anything special for me and that’s probably why I don’t like the genre so much anymore. I may go back and continue on with this series but now that I’m older it’ll probably feel a bit icky to me because these characters are teenagers and being my age and swooning over teenage boys makes me feel gross.

What books did you love when you first started blogging? Do you still love them? Are they different to any books that you love now?