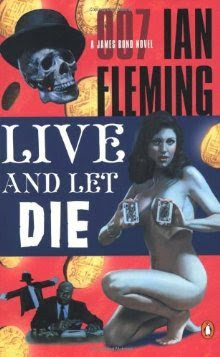 Her hair was blue-black and fell heavily to her shoulders. She had high cheekbones and a wide, sensual mouth, and wore a dress of white silk. Her eyes were blue, alight and disdainful, but, as they gazed into his with a touch of humour, Bond realized that they contained a message for him personally. Solitaire watched his eyes on her and nonchalantly drew her forearms together so that the valley between her breasts deepened. The message was unmistakable…

Beautiful, fortune-telling Solitaire is the prisoner (and tool) of Mr Big – master of fear, artist in crime and Voodoo Baron of Death. James Bond has not time for susperstition – he knows that Big is also a top SMERSH operative and a real threat. More than that, after tracking him through the jazz joins of Harlem, to the Everglades and on to the Caribbean, 007 has realized that he is one of the most dangerous men that he has ever faced. And no one, not even the enigmatic Solitaire, can be sure how their battle of wills is going to end…

I quite enjoyed reading Casino Royale and I don’t like abandoning a series (unless it really doesn’t do anything for me or is excruciatingly long) so I decided to steal borrow from my dad’s book collection and read this instalment.

As I said in my review of Casino Royale, I have never been a fan of James Bond. When I was little, I absolutely despised him since it was one of the soundtracks that my dad played in the car all time time (my dad likes soundtracks). I’ve seen nearly all of the movies, Live and Let Die being one of the ones that I haven’t (I don’t particularly intend to either).

My thoughts on this book are quite hard to put into words, mainly because I’m not too sure of what I think! I read this book while listening to the audiobook version so I kinda focused on the audio itself which made the experience just a bit more enjoyable. My apologies, but this review is going to be quite mismatched.

The story tends to be quite slow but does speed up a couple of times. I didn’t feel much tension or even any danger at parts, however, Mr. Big’s fate did make me squirm a bit because his end is not a nice way to go at all. I didn’t feel any sparks at all between Bond and Solitaire and their relationship felt quite flat to me, especially when compared to his relationship with Vesper Lynd but that’s probably because they had an incredibly sexual relationship and Bond doesn’t even feel Solitaire’s bum.

One thing that kind of got to me was the amount of times “Negro” appears in this book. I don’t particularly see the word as a racial slur but surely Fleming could have used a different word when addressing African-Americans and even Jamaicans. However, the N-word (you know which one I mean) does pop up a few times but it isn’t used by white characters.

I didn’t love this book, but I didn’t hate it at the same time; it could have been a lot better. There was a bit of a racist theme going on and that bugged me a little bit. However, I will still be venturing into the series at a later date!