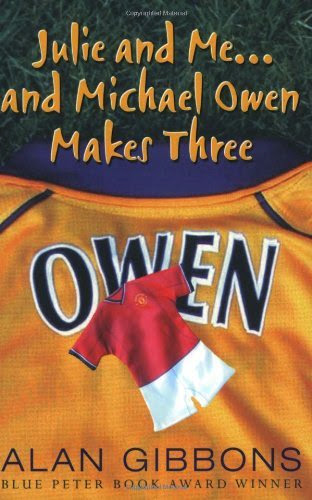 It’s been a year of own goals for Terry.

Life as Terry knows it is about to change in this hilariously funny, sometimes sad, utterly readable modern Romeo and Juliet story.

There is something wrong with that synopsis. This book was not a Romeo and Juliet story at all because Romeo and Juliet actually get together without anyone knowing. That doesn’t happen in this book because Julie and Terry hardly speak to each other.

I was quite disappointed and even a bit annoyed with this book. It was a lot like my Facebook news feed: negative after whine after whinge after put down after character needing a good smack across the face. Also, football makes up 90% of this book (watching football, commentating on football, being teased about football, playing football and last, but not least talking about football) while 10% is Terry doing other things that don’t involve football. The cover just showcases that this book is about football; it will definitely drag boys to it only for them to be horrified when it’s about a boy in love and not footballers.

There were very few characters that I liked in this book, they were all either obnoxious, pessimistic, in need of a slap or all of the above. Everyone argues about football and that really bugged me because I hear arguments about football every day (my hometown revolves around sports). They don’t realise that football is only a game. I was quite irked when Chloe, the only character who is nice and has a functioning brain, turned into everyone else because she got dumped.

Although this was quite a short book, it was quite hard to trudge though a football commentary, obnoxious taunts, pining and rhetorical questions every chapter. Every chapter has sections in that are given dates and times. I didn’t understand why these are present as the book isn’t in a diary format and takes place in the present tense. They felt a bit unnecessary to me.

There are a couple of good things I could say about this book; the first is that the book takes place in the North of England so I was able to relate to some elements of the book, like how the world of Northern England revolves around sports and that teams have enemies and those enemies will spill your guts simply for winning a match. The second thing (albeit a bit of a silly thing) is that my hometown of Sunderland is mentioned five times throughout the book during Terry’s football commentaries as he wants the team to win against one of the many teams that he hates.

All in all, this book was disappointing. And that will be because I am female, not a child anymore and I can’t stand football. There is a follow-up to this book and chances are, I won’t be reading it.