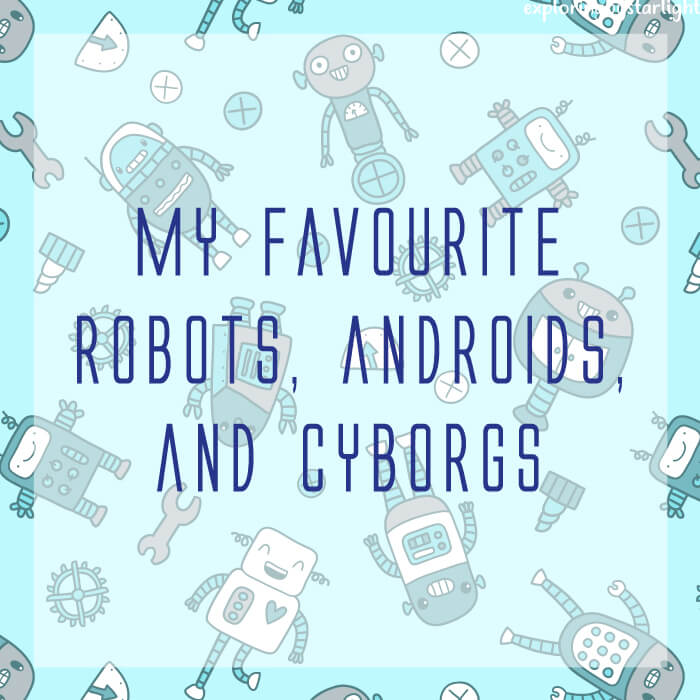 Last year I compiled a list of my favourite aliens in books, TV, movies, and video games, but this year I want to talk about the other most popular non-human beings in sci-fi: robots. And also cyborgs. Basically any mechanical being, whether entirely mechanical or if they still have organic parts.
The machines on this list are from a variety of different types of media, just like my alien list because if this was a list of only book characters, it would be very, very, very short. And I don’t do short posts, I do posts of the long-winded and rambling kind.

Let’s start with an obvious choice. In Futurama, Bender is the lovable alcoholic, kleptomaniacal, “whore-mongering”, chainsmoking, gambling cook at Planet Express. I have mixed feelings towards anti-hero characters but Bender’s moral alignment works well because it’s so unexpected of a robot. In fiction, robots tend to either be wholly good or wholly evil because that’s the way they’re programmed to be. Bender, however, tends to flipflop between good and evil because while he commits a ton of felonies, isn’t exactly friendly to his own friends, and harbours anti-human sentiments, he will still save the day, even if it’s to just save himself. Besides, Futurama isn’t a sci-fi show that can be analysed using regular sci-fi tropes because everything is played up for laughs.

I haven’t watched a lot of The Next Generation, but Data is my favourite character from that series. Similarly to Spock from TOS, Data is a character that doesn’t really experience human emotions and initially struggles to understand certain aspects of human behaviour, which differs from Spock. The two of them serve as an outsider’s view on humanity, but Data kind of fulfils that role more because he is constantly learning more about what it means to be human, whereas Spock is half human and is already kind of familiar with human behaviour and emotions, it’s more himself that he learns about. But anyway, back to talking about Data. Even though he’s an android, Data is a character that I can easily relate to because I have ASD and also tend to struggle with understanding things like feelings and behaviour. Also, he has a pet cat.

When I was planning out this list, I remembered Iko no problem, but I somehow forgot to include Cinder. How? I have no idea because her name is the title of the first book. Anyways, Cinder and Iko are easily two of the best characters in the Lunar Chronicles because of the dynamic they have. In the Lunar Chronicles world, robots are treated as tools despite having their own personalities, while cyborgs are treated as second-class citizens and face a lot of prejudices. Naturally, Cinder and Iko have a sort of kinship with each other due to them both being mechanical, which extends into them being almost sisters in a way.
Cinder is easily my favourite LC character because of how proactive and non-submissive she is. She always stands up for herself and has a plan, which is a huge contrast since she is the “Cinderella” of her story. Iko, on the other hand, is just the most adorable thing. Especially when she turns up in Cinder’s room with lipstick smeared on herself and wearing a pearl necklace. Just let me hug her, she’s so cute.

I don’t really like James Cameron as a person or a director, but the man did make some terrifying mechanical people-things. I’m personally torn between whether the T-800 counts as a robot or as a cyborg because while he does have a human appearance and can bleed, he was never human to begin with and on the inside is entirely robotic. Apart from the blood. Robot? Cyborg? Whichever it is, he’s still pretty terrifying in the first movie. Especially when he removes his fake eye. Yuck. I don’t necessarily mind that they made the T-800 into a hero in the next movies (minus Salvation) but I do prefer him as the villain he is in the first movie, which just so happens to be my favourite in the series.

How could I not include Cyborg in this list? I mean, it’s his hero name after all. Cyborg is someone who I think deserves to be recognised more, not just because he has the best personality I’ve ever seen in a superhero, but because he provides rep for both black people and disabled people. People shoving him into the background doesn’t sit right with me, and neither does people insisting that him having his own solo movie is “unnecessary” because Warner Bros “should just make a Teen Titans movie instead”. Cyborg hasn’t been a member of the Titans since 2011 because now he’s part of the League, and every league member is getting their own movie. And besides, there are tons of people who would watch that because there are people who are going to see Justice League for Cyborg (and i also must add that ray fisher is such an enthusiastic ray of sunshine, i love him). Let my son be an independent person, gosh darnit.

I will sort of embarrassingly admit that I have not watched a lot of Mystery Science Theater 3000, but I blame that on Netflix. There are twelve seasons of it and instead of putting all of the episodes up in a logical order, Netflix decided to just pick and choose from every season but the first so it goes back and forth constantly and whatever semblance of a plot there can be is completely jumbled up. But anyway, there are four main characters in this show: Tom Servo, Crow T. Robot, Gypsy, and Cambot (who is never seen because he’s the camera). Servo and Crow are naturally the most seen because they take part in riffing on movies and they are oh so witty. The format of MST3K can be difficult to get into because you’re watching three silhouettes watch a movie and talk over it but once you get the hang of it, it’s pretty funny; especially the bots.

These three look like full-on robots, but they’re actually cyborgs. And they’re not just cyborgs, but they’re cyborg ninjas and that’s ultra-cool. In-universe, the Lin Kuei, a clan of ninja-ish warriors located in China, introduce a plan to change all of their warriors into cyborgs. Initially, Smoke and Sub-Zero escape from the clan so that they don’t have to go through the procedure while Sektor and Cyrax stay behind and become cyborgs. In the old timeline, Smoke got captured and turned into a cyborg, while Sub-Zero managed to escape. In the new timeline, however, they both get captured and turned, but Sub-Zero is rescued and eventually becomes human again. Or human-cryomancer. It’s also worth noting that in the old timeline, Cyrax becomes good and regains his humanity (but not his body), while in the new timeline all of the cyborgs remain evil. Also, Sektor, Cyrax, and Smoke are able to fuse into one cyborg to fight as one. Which is still uber-cool.

There’s a lot of androids in the Dragon Ball franchise (although the term ‘android’ is used loosely in the English translation because most of them are actually cyborgs), but Cell is definitely my favourite of them all. Cell is a bio-mechanical android who is comprised of the cells of all of the Z warriors, which includes Earthlings, Saiyans, Namekians, as well as Frieza’s race, and tons of other humans that he literally drained the life-force from. He’s also 7 feet of pure smugness. I have a thing for smug and egotistical villains because they fall so much harder, and since this is Dragon Ball, seeing a smug villain transform three times and then get their ass handed to them by the heroes is the most satisfying thing ever. In the DBZ video games, I always tend to play as Cell because of his multiple forms and the fact that his move sets are always awesome. In the anime, however, the Android saga is my favourite because it isn’t as long as the Buu saga and isn’t as drawn out as the Frieza saga, and also has my favourite villain, yay.

Can Mr Freeze count as a cyborg? I personally think so because he needs cybernetics to live even though they’re not actually a part of his body. Anyway, Mr Freeze is one of my favourite comic book villains because I think that he truly deserves the title of sympathetic villain. The reason why he is the way he is is because he was so desperate to find a cure for his dying wife’s disease that he ended up in a lab accident. So then he decided to become a criminal to channel his grief. Like you do.

Another questionable choice, but here’s my reasoning: in the current MK timeline, Jax had his arms ripped off by Ermac and now has mechanical arms attached to his body. By that logic, he is, therefore, a cyborg. Jax’s character tends to differ based on what he’s featured in and who’s writing him, but 99% of the time he’s a total badass who kicks a lot of butts. The other 1% of the time he’s just a stereotypical black man. Just with cybernetic arms. And that’s not really a good thing.

Who are some of your favourite mechanical characters?