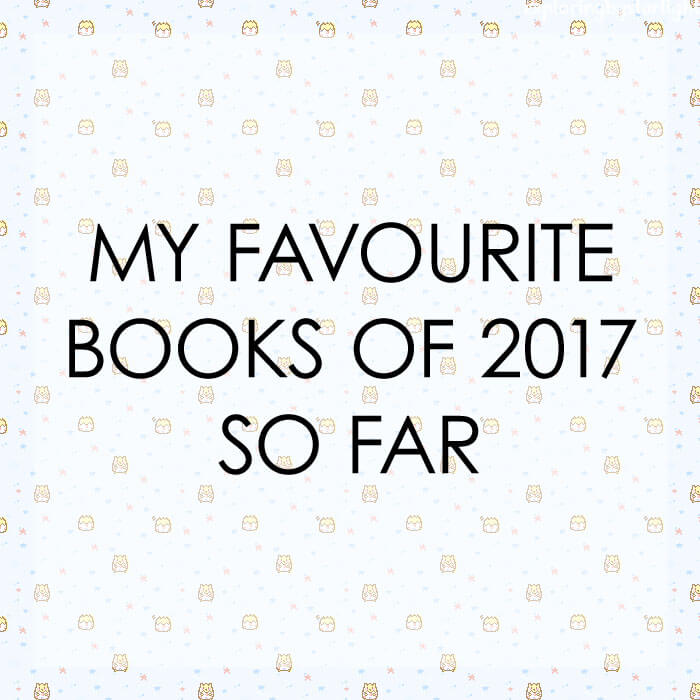 I’m way overdue doing one of these kinds of posts because we’re almost in the final quarter of this year (wat) but I felt like recounting which books I loved the most up until this extremely random point in the year. I’m a scatterbrain and I was in the middle of a huge funk when everyone else was making these kinds of posts so I’m doing it now.

So far this year has been a good reading year for me. I don’t read anywhere near as much as some book bloggers do (i see you, people who can read over 100 books in a year) and I initially managed to get ahead of my Goodreads challenge by reading a lot of comics 😅 I’m actually kind of burnt out on comics right now so I’m focusing more on reading novels and I’ve actually gained a couple of new favourites, which is always exciting.

If my memory is right (which it usually isn’t) this is the only book that I’ve rated five stars in this year so far. I would say that I picked this one up after the hype had calmed down, but the hype for this book still hasn’t calmed down because it is truly real. I’m a little disappointed with myself that it took me until this book to realise that I have read very little books with black main characters. And by that I mean that I can count on one hand how many books written by black authors featuring black main characters that I’ve read, and that’s not a good thing. Because of this book I’m more aware of how prevalent casual racism is in the world. Racism isn’t just the hate crimes you see in the media, it’s passing comments that people make to one another in the guise of “jokes”, it’s the things that you say to your family and friends, and it’s even what you don’t say and what you don’t do. The prejudice that black people face is not the same in the UK as it is in the US, but that doesn’t mean that non-US white people can’t recognise racism and anti-blackness when it’s right in front of them. This is one powerful book, friends, and I think everybody should read it.

Before I talk about this book, I just have to say one thing: I would 100% go back to Romania just to get the plate of food in this photo. I am the pickiest of picky eaters so it’s incredible for me to find something in a foreign country that I like, but that meal was the best. Yes. Anyways, The Dream Thieves. I read this book while I was in Romania, which somehow gave me more time to appreciate it because I wasn’t watching TV all the time when I was in the hotel, and I actually ended up enjoying it a lot more than the first book. Also, in the first book I wasn’t too fond of Ronan but he did start to grow on me in this book so I do like him more now. Not as much as Gansey, though. Gansey will always be my favourite.

I don’t know about you, but I like my contemporary romances to be quite fluffy. I’d also taken a class on Asian literature which mainly focused on Middle Eastern and South Asian writers so my interest in this book was sort of a continuation of that class. I will admit though, that when I first saw When Dimple Met Rishi floating around I didn’t think much of it, but once I saw more people talking about it, I was definitely more interested. And ohhhhhmygod, this book is so good. It’s exactly what I want in a contemporary romance: it’s light and fluffy, but has it’s deeper and more intense moments, and the characters are so realistic that sometimes you want to shake them. The fact that the characters are Indian-Americans is an added bonus. I’ve never read a book featuring South Asian teens before, which is pretty bad considering that 2.3% of the British population are Indian (there’s a large South Asian community in general, but they are mostly Indian because of imperialism and colonisation and all that). Because of that, I’ve learned quite a bit about Indian culture and family life from this book.

I know what you’re going to ask me: Louise, will you ever stop talking about this book or even Lois Lane in general? And my answer to that question is how dare you ask me such a question? I don’t need to explain how important Lois Lane is to me and ashamedly, I forgot that this series existed until I was reminded that the final book was released this year (which i got for my birthday yay) so of course I had to go back and get the first book. In hardcover. Of course. I usually have low to neutral expectations of media-tie in books because they can be really hit-or-miss with characterisation, but Gwenda Bond has really nailed Lois’ personality. I love how snarky and determined Lois is, even as a teenager, and her strong sense of justice and standing up for others really shines through, just like how Lois is in the comics. If you think that Lois Lane is nothing but a damsel in distress and a nuisance, this book will totally change the way you see her because she is an incredible girl who deserves more respect.

This is going way back to the beginning of this year so forgive me if I can’t remember much to say about this book 😅 I did make it a sort of goal to finish the Lunar Chronicles at the end of last year but obviously that didn’t happen because life got in the way. As it usually does. My favourite part of Cress is more than likely Thorne because Thorne is my favourite character. And even though I do like him and Cress as a pairing, I want him for myself because he’s such a jackass at times, but he’s my jackass.

I’ve actually managed to read this whole series this year which is kinda cool because I was completely surprised that this book was even a thing. Reading this book was a little bittersweet because on one hand I got to read more fluffy things with Lara Jean and Peter, but on the other hand, the series is over and I won’t get to see what happens with them next. But then again, it’s probably a good thing that the series is over now because six books of Lara Jean would probably be stretching it a bit thin. Anyways, I love how fluffy this book was but also serious at times. There were times where I really wanted to shake Lara Jean, which is sort of a good thing because she’s usually so sweet, and getting frustrated with her shows how realistic of a character she is, just like all of the other characters in this book. Although I will admit that I really started to dislike Margot in this book. She had such a bad attitude and it was completely uncalled for.

I’d had Dangerous Girls on my shelves for literally forever before finally picking it up this month, and oh boy am I glad that I did. It actually took me a little bit to get into this book at first because of the back and forth that was going on in the timeline, but once I pushed a bit further in, I managed to get into the swing of things and got so hooked. I haven’t been so frustrated by characters in a book in such a long time. And that’s not a bad thing because these characters are supposed to be frustrating and push every single one of my nerves. I haven’t read a mystery book in so long and this has kind of made me remember why I like the genre and now I just want more. Also, the ending of this book has completely broke my mind. It’s just that good.

What’s your favourite book you’ve read so far this year? What books are you looking forward to reading before the year is over?