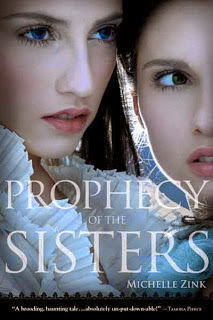 An ancient prophecy divides two sisters, one good… one evil… Who will prevail?

Twin sisters Lia and Alice Milthorpe have just become orphans. They have also become enemies. As they discover their roles in a prophecy that has turned generations of sisters against each other, the girls find themselves uncovering a lifetime of secrets. Secrets that could destroy everything.

Lia and Alice don’t know who they can trust.

They just know they can’t trust each other.

I came across Prophecy of the Sisters in my local library and the spine/cover design really caught my eye; it has shiny bits on (I love shiny things)! Also, the costumes that the over models are wearing really peaked my interest because I have a thing for period pieces.

The story of Prophecy of the Sisters had potential, I feel but it really wasn’t expanded on enough for my liking. I found reading to be incredibly frustrating as the pace was incredibly slow for me and as I continued on, I found it harder and harder to trudge through. I gave up at chapter 10. I couldn’t take any more of Lia’s constant worrying and blathering. One thing that annoyed me is that for a mystery, it’s an incredibly dull one. Nothing happens! Thank goodness for the pretty page designs.

I think what really led me to marking this book as DNF was the narrative. The novel takes place in 1890 and obviously the language that people used was quite different to what it is now, but I didn’t expect Lia’s first-person narrative to be so proper to the point that I didn’t find it believable.

I wanted to like this book. I really did. Every time I came back to it, I just immediately put it down again after about an hour of reading. I just couldn’t take any more of nothing happening.