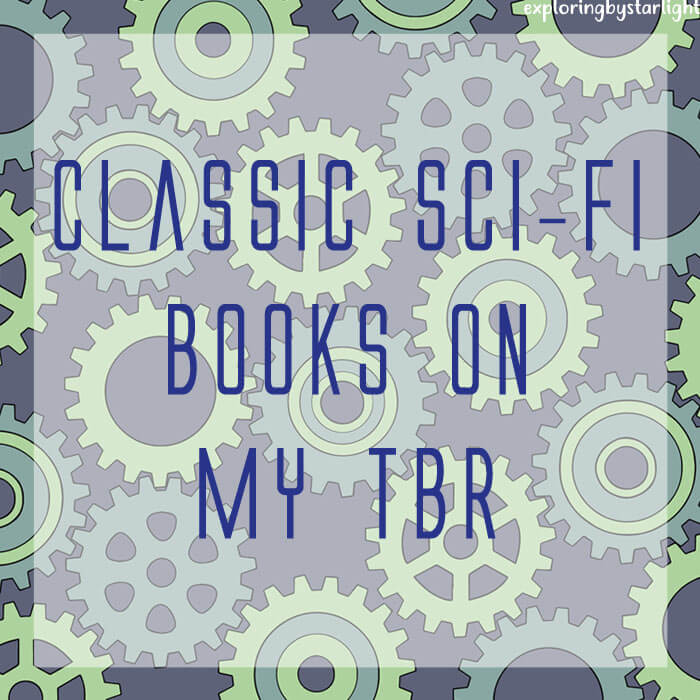 Even though I call myself a big sci-fi fan, I’m not actually that well-versed in classic sci-fi. Don’t laugh at my noobishness. This is both down to me being pretty intimidated by a lot of classic SF because these books tend to be door-stoppers that would take me about a month to read. In the past I’ve thought that I’m just not smart enough to read them because I’m not that good at real science, but recently my mindset has been “I HAVE A MASTERS DEGREE I CAN READ ANYTHING I WANT” which is probably a good mindset to have.

Usually I’m a little rigid in what I consider to be a “classic” book because I usually consider anything published before 1945 to be classics, and any ultra-famous book from the rest of the 20th century to be “modern classics”. In this post, however, I’m going to be a little more loose with the term because most of these books are from the latter part of the 20th century, but there are a couple from the 19th too. Because no matter what one person on Tumblr will try to tell you, science fiction was invented in the 19th century, not the 20th, and definitely not by Isaac Asimov.

The War of the Worlds by H.G. Wells – When I was little, my parents had an audio book of this in their car and it was probably the most elaborate audio book I’ve ever heard. It was more of a radio play/musical than an actual audio book. But anyway, I’ve never read any H.G. Wells but there’s aliens in this. I do already know how it ends, but that’s alright with me.
The Call of Cthulhu and Other Weird Stories by H.P. Lovecraft – Lovecraft is usually categorised as a horror writer but to me ‘cosmic’ horror usually involves things to do with space, so therefore it counts as sci-fi to me. Scary sci-fi but still sci-fi. I will admit that I’m a little hesitant to read any of Lovecraft’s stories because a lot of people have criticised him for having racist views and that unsettles me a bit. Hopefully The Call of Cthulhu isn’t one of his more racist works.
The Hitchhiker’s Guide to the Galaxy by Douglas Adams – It’s sort of a crime to be a British SF fan who hasn’t read The Hitchhiker’s Guide to the Galaxy. It’s probably up there with not liking Doctor Who or not drinking tea. Both of which I am guilty of. I’ve had a copy of this book for years but I still haven’t read it and I don’t even know why. It’s short and supposed to be hilarious, so what’s my deal?
Slaughterhouse Five by Kurt Vonnegut – The Second World War is not my favourite thing to read about after being bombarded with it not just by my parents but the entire country (it was an awful thing that happened but the way british people are obsessed with it is a little disturbing to me), however, Slaughterhouse Five does interest me for some reason. Maybe it’s because of the time travel, maybe it’s because it’s semi-autobiographical.
Brave New World by Aldous Huxley – Here’s the first of a few dystopian books that I’ll be talking about. The first dystopian book I ever read was Nineteen Eighty-Four, which is one of the most important books to me. However, I hadn’t heard of this book until a few years after and what drew me to it is how it’s kind of the opposite. IngSoc in 1984 keeps the people sedate through fear, whereas here society is disguised as a utopia to keep the people quiet. Now that’s pretty interesting.

Do Androids Dream of Electric Sheep? by Philip K. Dick – This book is on my TBR for this month but I’m not sure if I’ll get around to it this time. I’ll get there eventually because I’ve read one of Dick’s short stories before and I liked it, so I’ve got a lot of his books on my TBR. Plus, I’ve heard an album that was inspired by this book, and it’s awesome.
Jurassic Park by Michael Crichton – I’ve never seen the movie adaptation of Jurassic Park but that’s kind of because I want to read the book first. I didn’t actually know that it was based on a book until a couple of years ago so of course I have to read the book.
2001: A Space Odyssey by Arthur C. Clarke – I’ve had this book for ages and the reason why I keep putting off reading is the movie and the fact that I haven’t seen it. This book was written while the movie was being made and was published a matter of days after the movie came out so what do I do??? Do I watch the movie first?? Do I read the book first??? Do I just burst into a ball of flames because I don’t know what to do???
Atlas Shrugged by Ayn Rand – Let me tell you something, friends. This book makes me nervous. It really does. It’s a door-stopper that’s full to bursting with Rand’s own philosophy (that i don’t necessarily agree with) and it looks like it could beat me up because I’m tiny but for some reason I actually want to read it. I can’t really explain why but I probably want to be able to challenge myself.

The Handmaid’s Tale by Margaret Atwood –  For the longest time I never had any interest in this book but recently it has sparked some interest in me, and not just because of the TV series. Like most people in the blogosphere I had a big falling out with dystopian fiction a few years ago (mainly because the ya market was saturated with books that were all too similar) but now instead I’m more interested in classic dystopians because they feel so much scarier.

A Princess of Mars by Edgar Rice Burroughs – So far I’ve only read two of Edgar Rice Burroughs books and those were part of his Tarzan series, which is probably as far away from sci-fi as you can get. There was a movie based on this book a few years ago but apparently it didn’t do very well so I didn’t see it. But it’s got Mars in the title so I have to go for it.
We by Yevgeny Zamyatin – I first came across this book in a textbook I was skimming through about Nineteen Eighty-Four (which is my favourite book, btw) and anything that is somewhat similar to Orwell’s work or is related to it is immediately up my alley. Apparently, Orwell had been inspired to write Nineteen Eighty-Four after reading We, but I don’t know if that’s true because the same was said about Brave New World. This is a Russian book set in a dystopian future where nobody has names and everything is made from glass so that the government can spy on everyone. Sign me up.
Dune by Frank Herbert – Here’s another book that’s so big that it’s intimidating but I still want to read because it’s considered a staple of the genre. I have a sort of general idea of what Dune is about because I read an excerpt of it at uni but that’s about all I know.
Foundation by Isaac Asimov – I usually prefer stories about aliens, and Asimov’s books are usually about robots, but he’s often considered to be the sci-fi writer. Hard sci-fi usually isn’t my thing because sometimes I don’t think I’m smart enough for it, but I am willing to give it a try because I do like there to be science in my science fiction at times.
From the Earth to the Moon by Jules Verne – Here’s a fun fact about this book: there used to be a roller coaster in Disneyland Paris based on it. A roller coaster. And I never got to ride it because it got changed into an updated version in 2005 and took all of the original book stuff out of it. I’m bitter about it because I love roller coasters but I probably wasn’t tall enough to ride it anyway. But anyways, I have seen a movie from 1902 based on this book (Le Voyage dans la Lune if you’re interested. it’s the one with the rocket ship getting lodged in the moon’s eye.) so I kind of have an idea of what happens in it. I actually haven’t read any of Jules Verne’s work even though I’ve wanted to since I was either nine or ten years old. What’s taking me so long??? I don’t know but I need a swift kick up the ass.

What classic SF books do you want to read? What would you recommend to me?