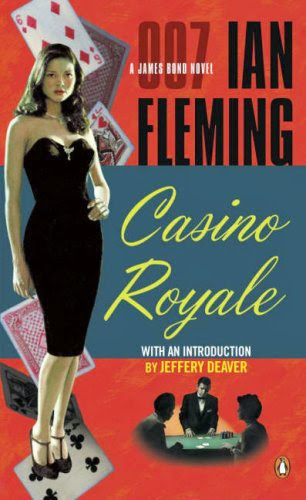 ‘A dry martini,’ Bond said. ‘In a deep champagne goblet. Three measures of Gordon’s, one of vodka, half a measure of Kina Lillet. Shake it very well until it’s ice cold, then add a thin slice of lemon peel. Got it?’
‘Certainly, monsieur.’


Introducing James Bond: charming, sophisticated, handsome, chillingly ruthless and very deadly. This, the first of Fleming’s tales of agent 007, finds Bond on a mission to neutralize a lethal, high-rolling Russian operative called simply ‘Le Chiffre’ – by ruining him at the baccarat table and forcing his Soviet spymasters to ‘retire’ him. It seems that lady luck is taken with James – Le Chiffre has hit a loosing streak. But some people just refuse to play by the rules, and Bond’s attraction to a beautiful female agent leads him to disaster and an unexpected saviour…

Every single James Bond book in my house (not counting the Young Bond series) belongs to my dad. Considering my dad’s usual taste in books (he used to read maps and atlases before going to sleep) and my hatred for the Bond films, I didn’t expect much from this book at all. I expected it to be exactly like the film version with Daniel Craig: all action, gunfights and no content other than that. My dad has a boxset of these books and all the covers are relatively the same, they’re quite boring and remind me a bit of the opening credits to the old films for some reason.

Honestly, I was very impressed by this book. It was almost nothing like the film but it did get a little boring at times, especially in the baccarat scene. I don’t have a clue of how card games work and I was completely lost whilst reading it. I liked how there was no sign of “A dry martini, shaken, not stirred” and how Bond was nothing like Sean Connery, George Lazenby, Roger Moore, Timothy Dalton, Pierce Brosnan or Daniel Craig. Although that’s probably because none of them were born when this book was published…

I thought Bond’s personality in this book was very realistic of a man of the times although he does get a little confusing at times. First he doesn’t like Vesper at all (he thinks that women are only good for one thing), then he does and wants to marry her, and once she’s dead he calls her a bitch. A bit confusing. Well, it was for me.

Overall, I enjoyed this book more than the twenty-two films I’ve been forced to sit through. My hate-hate relationship with Bond is now more of a love book Bond/hate film Bond relationship, if you know what I mean. I liked Fleming’s style and I look forward to reading the next book.