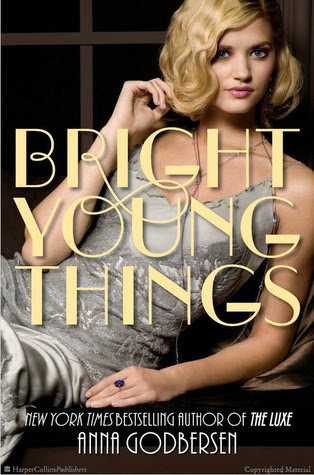 The year is 1929. New York is ruled by the Bright Young Things: flappers and socialites seeking thrills and chasing dreams in the anything-goes era of the Roaring Twenties.

Letty Larkspur and Cordelia Grey escaped their small Midwestern town for New York’s glittering metropolis. All Letty wants is to see her name in lights, but she quickly discovers Manhattan is filled with pretty girls who will do anything to be a star…

Cordelia is searching for the father she’s never known, a man as infamous for his wild parties as he is for his shadowy schemes. Overnight, she enters a world more thrilling and glamorous than she ever could have imagined—and more dangerous. It’s a life anyone would kill for . . . and someone will.

The only person Cordelia can trust is Astrid Donal, a flapper who seems to have it all: money, looks, and the love of Cordelia’s brother, Charlie. But Astrid’s perfect veneer hides a score of family secrets.

Across the vast lawns of Long Island, in the illicit speakeasies of Manhattan, and on the blindingly lit stages of Broadway, the three girls’ fortunes will rise and fall—together and apart. From the New York Times bestselling author of The Luxe comes an epic new series set in the dizzying last summer of the Jazz Age.

This was the first book I’d read by Anna Godbersen so I didn’t have any expectations or hopes of what her style would be. I wanted to be pleasantly surprised by this book. I really like historical fiction and hoped that this would be very entertaining to read.

I enjoyed this book, but there were a few things that bugged me a little bit. First of all, the characters were a little flat and didn’t seem very real to me. Secondly, the constant repition of Letty’s mouth being described as a “little gem” started to get on my nerves. The descriptions of characters weren’t varied much, which isn’t so good in my book.

However, I did like the plot and storyline of the book. It was very entertaining to read. But, the ending was a little stale, I expected better and it was obviously set up for a sequel.

I guess I’m a picky girl who doesn’t like repetition and flat characters. This book was entertaining and I do recommend it to some extent but I wouldn’t call it the most amazing book in the world. I like Godbersen’s writing style and I am sort of looking forward to reading the next book in the series.