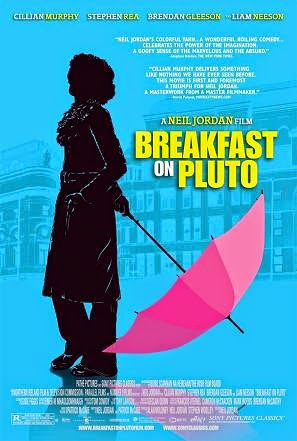 A foundling lad, Patrick “Kitten” Braden, comes of age in the 1970s. He leaves his Irish town in part to look for his mother and in part because his transgender nature is beyond the town’s understanding. He’s taken in by a rock band, falls for the lead singer, has brushes with the IRA, is arrested by the London police, works in a peep show, and poses as a survey researcher for the phone company. Throughout, his nationality and his nature put him at great risk. In his search for his mother, he makes surprising discoveries of friendship and family. But, will he survive?

I remember coming across this film when looking through Cillian Murphy’s filmography on IMDb’s iPod app. The colourful poster drew me in so I read the brief summary and liked the sound of it. The cast got my interested further (especially Liam Neeson who is amazeballs) and I just had to buy the DVD. I’m always interested to see what some men look like when they dress as women and from the stills I’ve seen; Cillian Murphy makes a very pretty girl. The DVD box art is nice; it’s got rainbows on it! If you saw me tweet “IT’S HERE OMG EXCITEMENT AND SUGAR AAAAAAA!!!!” you’ll know how excited I was to watch this film.

Before I continue, I would just like to say that, thanks to this film, I have seen Liam Neeson fly and Cillian Murphy in a bra.

I really like the plot, as I’ve said; transvestites will always fascinate me (especially male ones). Also, one of my favourite cultures (the Irish) and eras (the 1970s) are combined. Even though the main plot is touching, I laughed all the way through this film. Well, except for one part…

The IRA plays a part in the film, especially when Lawrence (who has Down syndrome) dies when a bomb is set off in the village. I don’t usually cry at films, but I did get quite teary at this point. Especially at the funeral afterwards. It’s the slow motion that emphasises it. Other than that, I laughed until I couldn’t breathe while watchting this film. The book is definitely on my to-read list,

Before watching, I’d only heard of two cast members – Cillian Murphy and Liam Neeson. However, I do think that the cast members suited their characters. I can’t really say if they portrayed them correctly though, since I haven’t read the book.

I loved Cillian Murphy’s performance as Kitten (I know that Kitten’s name is actually Patrick but for this review, we’ll call him Kitten). I just have to say that the fake girl voice had me in kinks the first time I heard it, then it started to sound natural. I especially liked how Murphy portrayed Kitten as somewhat delusional at times, it added to the humour. He definitely deserved that Golden Globe nomination.

What can I say about Liam Neeson other than that he is awesome? For someone who is Northern Irish, Neeson does a very convincing sourthern Irish accent (there is a difference). I was quite disappointed that Father Liam (that’s the name of his character) didn’t have more screen time, he was an awesome character played by an awesome actor.

I wasn’t alive in the 1970s, and I’ve never been to Ireland. However, I felt that the film was very realistic as many of the events surrounding the IRA did happen. You probably shouldn’t listen to my judgements on how realistic something set in the past is though, because I won’t have experienced it first-hand. I do love the realistic aspect of the film though. It makes it more believable and enjoyable.

I tend to be fussy about films that don’t have scores and used liscenced music from recording artists, but this film pulls it off incredibly well. The songs that are used are from the era and are used at the most appropriate of times. I did hum them wile watching since they are so catchy. I even liked the short inclusion of The Wombling Song.

As I said before, I’ve never been to Ireland, but I do want to because it looks so pretty. I liked how the beginning was set in a small Irish village rather than one of the large cities like Dublin. It wouldn’t have the same effect of alienation and being an outcast that Kitten has at the beginning.

I liked how very few landmarks were shown in the London scenes. Nearly every film set in London shows every single landmark and this one only shows Big Ben, the tube stations and the back streets. I liked seeing that part of London because it shows how seedy and dangerous the city can be.

I really, really, really enjoyed this film. I first watched it after having a bad day and it cheered me right up. It’s both funny and heart-warming  had me laughing all the way through. The cast is wonderful, as is the music. I highly recommend this film!