Sometimes you get really hyped up for a book, and then as time goes by the hype just fizzles out. I’m sure it happens to all of us from time to time, but it happens to me a lot. My interests change all the time even though I have things I will always love, and things that excited me at one point in time won’t do anything for me at another point. Or sometimes I’ll learn things about an author that will really turn me off them. And sometimes, it was a case of me just growing up and my reading tastes just maturing with me. For me, losing interest in certain books I wanted to read before is kind of a natural thing and I’m more welcome to let it happen because who knows, I might end up reading them after all.

I’ve been in the blogosphere long enough to remember when this series was the biggest of deals and everybody loved it, so I went out to buy a copy of the first book and then just… forgot about it. Part of it is because high fantasy isn’t really my thing unless it’s by Leigh Bardugo, and the other part is that recently there’s been a bit of criticism of Sarah J. Maas’ work for representation issues. Because of that, I haven’t just backed away from those books because I never set foot into them anyway. But from what I’ve seen, it’s unlikely that I’ll be reading them any time soon.

Do you know how many books are in this series? Fifteen. Fifteen. I love me some vampires, so much that I’m writing my Masters dissertation about them, but fifteen books in one series? A girl needs a break from so many vampire stories sometimes. I don’t usually see a problem with long series, considering I read western comics which are constantly going, but fifteen novels in one series is a bit of a stretch for me. It’s only a matter of time before I get bored and want to move onto something else.

If you follow me on Twitter, you’ll know that I have a little bit of a grudge against Frank Miller. In short, his version of Batman is not my favourite. In long, he’s not my favourite because he turned a pretty liberal character into a fascist whose only solution to everything is to beat people up. Yeah, no thanks. He also gets way too much credit for bringing Batman back to his darker roots, which should go to Denny O’Neill in the 70’s, but I’ll try to keep my Miller hatred to a minimum here. I originally read The Dark Knight Returns when I was about twelve and thirteen and I liked it at the time, then I read The Dark Knight Strikes Again which is a hot mess. Now, I’m sick to death of DKR. It doesn’t work in a modern context anymore and I get bored of seeing this thuggish brute who is somewhat abuse and fell in love with a child (yes, really) being drawn in an ugly artstyle and being given terrible dialogue. I will never forgive Miller for having Batman starve Robin, force him to eat rats, and call him the R slur. #NotMyBatman. When I found out not just about this third miniseries, but about Miller’s politics in general, I completely lost interest in his work. I can appreciate what he did for the character, but that’s about as much praise I’ll give him. I just can’t take any more of Miller’s racism, fascism, or misogyny. Or his ugly art and fondness of the word ‘goddamn’. Want a physical reason why I think his art is ugly? Here’s a photo of a shirt I saw in New York: 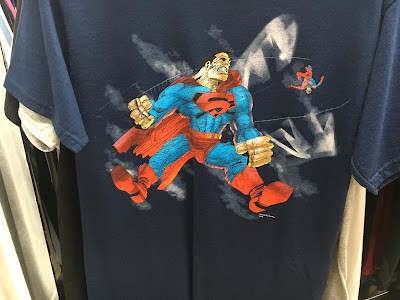 Yeah. Poor Clark looks like he has a horrible skin condition. Good thing he left the art in All-Star Batman and Robin too Jim Lee, but there’s still the terrible dialogue and characterisation.

Remember when paranormal romance was all the rage? I certainly do, and back in 2012 (i think) I participated in a readalong (anybody else remember those too? i’m so old now…) for Sweet Evil and I was actually excited for the sequel, and then… Poof, completely forgotten about. Most of the time this happens because I am the absolute worst at knowing when books are being released unless I’m giddily excited for them and I have a habit on relying on other bloggers to know when things about being released. Terrible for a booklover, I know, but I have the worst memory in the world. Once I got round to actually getting a copy of Sweet Peril I’d forgotten everything that happened in the first book and I wasn’t in the mood to reread it, so it just stayed on the shelf.

Oh, look, another paranormal romance. Like I said, paranormal romance was all the rage back in the day (along with dystopians, but i’ll get to that in a bit) and I was a youngin who wanted to fit in with the big bloggers who all got ARCs of these books and I read them too. I feel a little bad this I abandoned this series because I absolutely loved them. I mean, it’s about aliens, how could I not? Again, this is all down to release dates. I never know when books are being released and they’re always released to far apart from one another that I end up forgetting things. Then add the fact that I’m not fond of rereading on top of that and you end up with an abandoned series. Maybe one day I’ll get around to reading Opposition because I do still have a soft spot for these books, but it’ll mean that I’ll have to reread all four of the previous books. It’ll probably be weird to have to swoon over these teenage characters considering that I’m a real adult now. Yikes.

I have all three of these books, and I still have only read the first one. It actually took me two attempts to get through Divergent and I ended up not loving it but thinking it was a solid enough book. I probably put Insurgent onto my physical TBR pile once and then took it off because I had very little desire to read it, and then ended up forgetting about the series altogether. Dystopians used to be incredibly popular back in the day thanks to The Hunger Games and I used to read as many of them as I could, but now I barely see dystopian books get any hype and I haven’t read one in years, which is strange for a genre that used to be my favourite.

I started reading Breaking Dawn at the very end of my Twihard phase and lost interest in it just over a quarter of the way through. By this point my reading tastes had changed and I was becoming more critical of the Twilight saga as a whole and I remember reading it and just thinking “I can’t be bothered with this anymore”, so I never finished it. This is probably the only book I’ve mentioned here that is a definite DNF because every other book was finished and then I didn’t want to read the sequels, but this was the end of the line and once I started, I’d just had enough. I even ended up reading the Wikipedia summary for Breaking Dawn and found it either ridiculous or cringeworthy so maybe it was a decision for the best to not read it. I didn’t even see the movies, I was completely done with Twilight forever.
What books or series have you lost interest in?