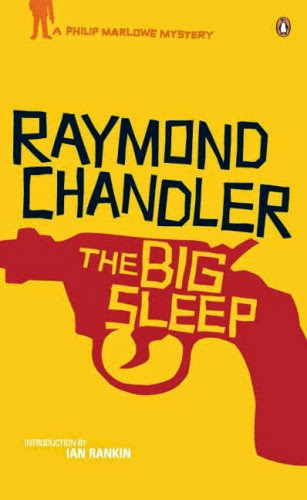 ‘Neither of the two people in the room paid any attention to the way I came in, although only one of them was dead.’

Los Angeles PI Philip Marlowe is working for the Sternwood family. Old man Sternwood, crippled and wheelchair-bound, is being given the squeeze by a blackmailer and he wants Marlowe to make the problem go away. But with Sternwood’s two wild, devil-may-care daughters prowling LA’s seedy backstreets, Marlowe’s got his work cut out – and that’s before he stumbles over the first corpse..

I had originally read the opening chapter of this book to use as a stimulus for my GCSE English coursework and I was initially impressed by that opening chapter and had to read the rest of the book. The cover is very nice and has a pulp feel to it.

I was very impressed by this book. I loved Marlowe’s character of the witty and wise Private Detective who tells it like it is. In my opinion, he is a real man. Carmen Sternwood was one of the more confusing characters, I was very unsure of what she was doing most of the time. Or why she constantly giggled. This book can be very confusing if you don’t pay close attention to the plot.

The prose is fantastic and the way Chandler describes things in Marlowe’s voice is superb, he shows how observative Private Detectives are and how they analyse things. The book really felt like a 1940’s noir film. Except it’s set in 1939.

One thing that strikes me is that Chandler leaves the ending open to the reader so that they can decide to committed the crime, instead of saying who exactly did it (the film version with Humphrey Bogart and Lauren Bacall does this and says that it is Carmen and only Carmen).

This book was really enjoyable, the first person narrative really gives the story a more intimate feel so that we actually know what the detective is thinking, rather than a narrator telling us what is happening. If you know me, you will know that I love first-person narratives in something that isn’t saucy. I’d definitely recommend this to anyone who loves crime novels or noir films.