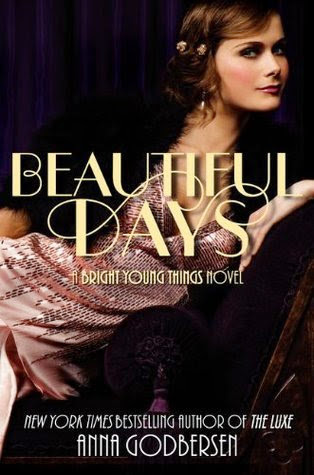 It’s the last summer of the Jazz Age and the Bright Young Things of New York are revelling in beautiful days and glittering nights.

Letty Larkspur has shaken off her smalltown origins and is set to chase her broadway dream no matter what the cost.
Gordelia Grey is reeling from the tragedy that’s befallen her new-found family but she won’t let it hold her back.
Astrid Donal is leading a dazzling life but her liasion with a gangster could threaten everything she holds dear.

I was quite impressed with the first book of this series and as soon as this one came out, I just had to buy it straight away! But, like most books that I buy, this went straight on my shelf and became a bit dusty and had to wait until I’d finished another book that I was reading (which took me quite some time). Since the cover model of Bright Young Things was Astrid, I’m assuming that this is Cordelia from the images on Anna Godbersen’s website. The love the cover, mainly because the dress is incredibly pretty and I wish I could look like the model (in my dreams).

I liked this book a lot more than the first. The characters were a lot more well rounded; some of them becoming even more shallow *cough*Astrid*cough*. In this book, I was routing for Letty most of the time, rather than Cordelia or Astrid as they already have what they wanted and Letty has to work her way up to the top.

I felt that the plot of this book was a bit slower than the first, but somewhat more daring (if that makes sense). I liked how the characters were placed in situations that they wouldn’t have dreamed would happen to them, especially towards the end. There was more of a danger feel to this book, which I really liked. I love it when a book has me on edge.

As I’d said, I was routing for Letty all the way through this book, mainly because I was able to connect with her and know how she felt. I felt that she was the most dimensional of all the characters and the most relatable as there are people who are like Letty. I loved how innocent she can be, it made her really cute.

I didn’t think it would be possible, but Astrid became even more shallow in this book. And there is nothing that turns me off a character more than being shallow. The fact that she purposely does things behind Charlie’s back in an attempt to get back at him really didn’t impress me. However, I liked that she holds her friends near to her heart even though she is desperate for Charlie’s attention.

If I had to pick one character that I detested; it would be Charlie. His relationship with Astrid, to me, was incredibly reminiscent of Sammi and Ronnie from Jersey Shore. He tells her to do something, she doesn’t do it. He yells at her, she yells back. They break up, they get back together and everything happens all over again. Their relationship was so on-again-off-again that I ended up not wanting them to get back together at all.

Something that felt incredibly awkward to me was the subject of sex and how it is discussed. I read a lot of books that have sex in and never usually feel uncomfortable, but the way it was handled and talked about by characters was so awkward it nearly made me laugh. The fact that the words “sex”, “intercourse” or even “love-making” weren’t used made it even more of an innuendo.

I was incredibly relieved that there was no sight of “little gem of a mouth”. That description was used so much in Bright Young Things that I began to see it as a cliché and thankfully it wasn’t used at all here. However, the many many many descriptions of clothes bothered me a bit mainly because I don’t really care about what characters are wearing (I’ve established this feeling from the many bad fan-fictions I’ve read) and how they flatter their bodies or the way they move, I want to know what is happening to the characters and the world around them.

Overall, despite the minor setbacks, I really enjoyed this book. It was a nice refreshing read (compared to a lot of books I’ve been reading recently) and kind of made me realise that I should read more books like this. Not many of the characters are relatable, but there are certainly likeable.