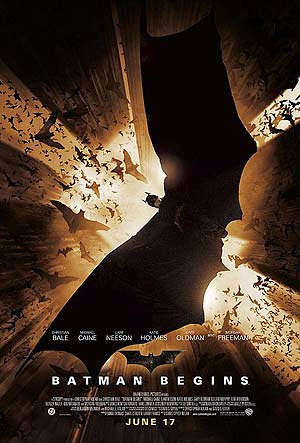 In the wake of his parents’ murders, disillusioned heir Bruce Wayne travels the world seeking the means to fight injustice and turn fear against those who prey on the fearful. With the help of his trusted butler Alfred, detective Jim Gordon and his ally Lucius Fox, Wayne returns to Gotham City and unleashes his alter ego; Batman, a masked crusader who uses strength, intellect and an array of high-tech weaponry to fight the sinister forces that threaten the city.

I love Batman. That is something I would never lie about. And honestly, I’d never heard of Christopher Nolan before watching this film and I was hoping that it would be absolutely nothing like the giant shit that Joel Schumacher took on the Batman franchise with Batman Forever and Batman and Robin. I guess that I didn’t know what to expect because I wasn’t familiar with the director or his style.

Reboots and origin stories are hard to execute. They have to be done right and here, David S. Goyer has done it perfectly. The plot of the film is incredibly gripping and a lot more realistic than previous Batman films. The beginning is quite mismatched because the time and location switches around without warning. It can get a little confusing when you’re watching the film for the first time.

Origin stories fascinate me because every writer will have their own version, but with the main element always staying the same. In this case, the murder of Thomas and Martha Wayne in front of their son’s eyes. It is a pretty powerful scene and it’s really tense but there’s one thing I picked up on: they went to see Mefistofele, an opera, rather than going to the cinema to see The Mark of Zorro which has a lot more significance (if you read Batman, you’ll know what I mean). Mefistofele does have a little bit of significance because the monsters who look a bit like bats (the young Bruce has chiroptophobia – a fear of bats) scare Bruce into asking his parents to leave the theatre.

I give the biggest kudos to whoever did the casting as the chose the perfect cast. I have a ramble, so I’ll try to keep it short and fangirl-free.

Christian Bale is my favourite live action Batman (second overall) and he completely made the character his own. He really captured Batman’s rage and made the best Bruce Wane I’ve ever seen. I wasn’t too fond of the growling though. It ended up sounding a bit silly.

I loved Michael Caine’s performance of Alfred. It was nice to see an Alfred who doesn’t speak like a member of the Royal Family. Michael Caine was perfect for the part and performed incredibly well.

Liam Neeson is one of my favourite actors and it was great to see him play a villain. He made for an excellent Ra’s al Ghul. However, I did think that he would pronounce his own character’s name correctly. Ra’s al Ghul is pronounced Raish al Ghul, not Raaz al Ghul, like it is here.

I’m glad that Scarecrow was chosen to be in the flm and even more glad that Cillian Murphy played him. I really liked how he showed Dr. Crane as a croocked psychiatrist who becomes increasingly more crooked as the film progresses rather than being deranged from the start.

I don’t know much about Lucius Fox, but Morgan Freeman owns every character he plays, especially Fox. Gary Oldman also owned his role of Jim Gordon, he really should’ve had more screen time.

I really didn’t like Katie Holmes’ character Rachel. There’s just something about Original Characters that grind my gears. It’s like the story is one of those shape things that a baby plays with and an Original Character is a sqaure peg being pushed into the round hole. To me, they just don’t fit.

Compared to Leslie H. Martinson (1966), Tim Burton (1989 and 1992) and Joel Schumacher’s (1995 and 1997) films, this film is one of the most realistic Batman films you’ll find (apart from the 1940’s serials). Not a single character has powers and things like that are simply hinted at (like Ra’s al Ghul’s immortality). It think it’s good that the film is realistic because if it wasn’t, it would be ridiculous (take Schumacher’s abomination Batman and Robin, for example).

Fortunately, there are no songs from major recording artists (in other words, pop stars) featured in this film, just an amazing orchestrated score which suits the scenes and nature of the film just perfectly. Plus, there isn’t a single note to be heart of a theme song that shall not be named or any other theme song that gets stuck in your head at the most inappropriate of times. Kudos to the composers!

Now, Gotham City isn’t a real place, that’s fairly obvious. However, it does look how a city of its kind woujld look. I liked how the city was shown from the highest and lowest locations, which shows to me how Batman is everywhere in Gotham. I also liked how nearly all of the city scenes take place at night.

I love seeing how Wayne Manor is varied in different mediums and, thankfully, the manor is shown to be a bit more “American”. What I mean by that is, in previous incarnations, the manor is shown to have suits of armour on display. America didn’t exist in the days of suits of armour and stuff like hat, so why the hell would they be family heirlooms in Wayne Manor? Fortunately, there aren’t any here. Nolan definitely chose a good house to film in.

I liked how Arkham Asylum wasn’t presented as a loony bin that’s falling apart from the inside, as it usually is. I’ve never been to a mental hospital, but I imagine that one would look like the Arkham Asylum here. It was nice to see the Asylum in one piece.

The landscapes for the scenes in the Himalayas (it’s actually Iceland) are beautiful. The mountains are gorgeous and add to the feeling of isolation that the beginning of the film has.

If it weren’t for me not liking Katie Holmes (and her character) and thinking that the Batman growl got a bit silly, this film would’ve had five stars from me. This is a really enjoyable film with an excellent story, brilliant cast (minus Katie bloody Holmes) and memorable characters. I highly recommend, so go watch!